A special award ceremony has taken place at the Civic Centre to mark the lifetime work and special achievements of 31 Enfield volunteers. 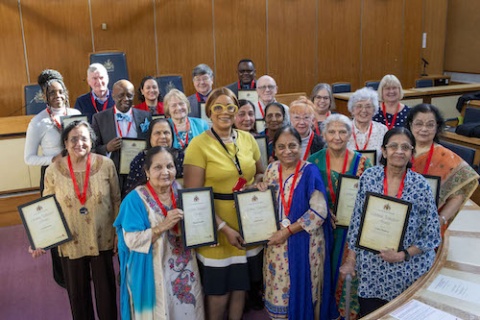 The new, annual Lifetime Achievement & Special Recognition Volunteering Awards was launched in December to recognise the exceptional contributions to volunteering and reward those people who go above and beyond normal expectations.Enfield Council’s Cabinet Member for Community Safety and Cohesion, Cllr Nneka Keazor, met the volunteers on 25 February and awarded them with certificates and medals as a thanks for their efforts.Cllr Keazor said: “This inaugural event celebrates the enormous effort, initiative and commitment volunteers have shown and recognises those who selflessly dedicate their time and abilities to helping others. It also raises the profile of the borough’s volunteers who have made a massive contribution to people’s welfare and wellbeing.”There were two categories. The Lifetime Achievement Award, in recognition of an individual’s long-term commitment to volunteering, to celebrate the effort and dedication they have shown over a number of years; and the Special Recognition Award for individual volunteers who have given exceptional service to others,  particularly over the past year.

The winners were chosen from nominations made by residents, voluntary organisations and community groups. The full list of winners is below.

Cllr Keazor added: “During the COVID-19 pandemic, volunteers in Enfield demonstrated an exceptional display of solidarity to assist vulnerable groups and to support the Council in providing essential services. We don’t see this enthusiasm waning and as the cost of living increases, we know Enfield’s volunteers will play an increasingly more vital role.”It is estimated that around 100,000 people in Enfield volunteer on a regular basis. There are countless opportunities in the borough to get involved in volunteering – from litter picking and maintenance with the Friends of Enfield’s parks to helping in local libraries.Enfield Voluntary Action works closely with Enfield Council to help people and community groups access the knowledge, skills and resources to make a real impact in the borough. You can find out more by attending one of their free workshops. Sign up at https://enfieldva.org.uk/volunteering-in-enfield/ .

Some quotes received about the nominees:
“He has given exceptional service to the whole community since the beginning of the pandemic”.

“He sets high standards and leads by example because he loves the park and wants to improve it for the benefit of the whole community.”

“I feel that they deserve this award as they have done so much for our community over at least 30 years and are continuing to do their good works for the whole community.”

“My father was born in Enfield and has volunteered in the area continuously for nearly 52 years.  He is dedicated, humble and, most of all, enjoys supporting the local area which he proudly calls his home.”

"Totally dependable and unflappable, his ability to unite a committee, encourage sponsors and deal with residents - and to keep all on board - is indeed an achievement worth an award."

“The Nightingale Team are extremely grateful for all that they do for the charity and we estimate that they have collectively worked over 20,000 hours, equal to one full-time member of staff working over a 10 year period."

Keywords:
Enfield Civic CentreAward CeremonyEnfield Volunteers
Your comment has been forwarded to the administrator for approval.×
Warning! Will constitute a criminal offense, illegal, threatening, offensive, insulting and swearing, derogatory, defamatory, vulgar, pornographic, indecent, personality rights, damaging or similar nature in the nature of all kinds of financial content, legal, criminal and administrative responsibility for the content of the sender member / members are belong.
Related News