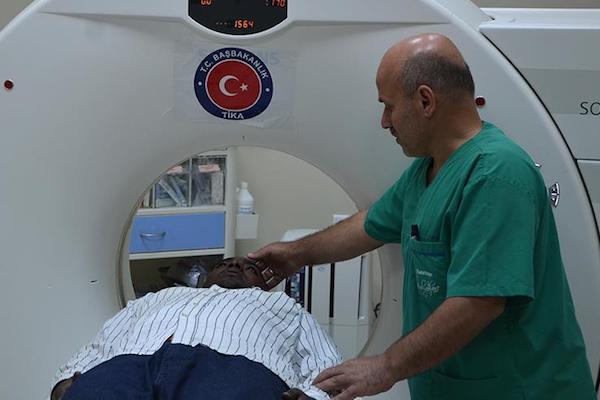 ANKARA-Hospitals built by Turkey in Somalia, Sudan, and Libya continue to serve thousands of Africans otherwise unable to access healthcare due to ongoing conflicts.

The agency, which has over 10 offices across Africa, has carried out a number of projects as part of Turkey's outreach to strengthen cooperation with the continent.

One of them is the Somalia-Turkey Training and Research Hospital established in 2015 in Mogadishu, which offered at least 67,000 locals healthcare service last year alone.

TIKA provided the hospital with equipment and supplies to offer quality healthcare services.

Under an agreement, the hospital is being operated jointly for five years, with the Turkish Health Ministry providing specialized personnel and financial support, after which the hospital will be run by Somalia alone.

Another such project is the Nyala Sudan-Turkish Training and Research Hospital built three years ago in Darfur, Sudan’s capital.

It has so far served nearly 250,000 people, including Sudanese and people coming from countries such as Cameroon, Chad, and Gambia, data shows.

The hospital, with 150 regular beds, three operating rooms, a fully equipped radiology unit, an intensive care unit, and numerous laboratories, serves in almost every field to meet the growing healthcare needs of people.

Doctors at the hospital are also trained by Turkish specialist doctors.

Construction concluded early this year, later than scheduled due to the internal unrest.

With an average capacity of 200 patients per day, the hospital is intended to alleviate the suffering from physiological trauma due to the civil war.