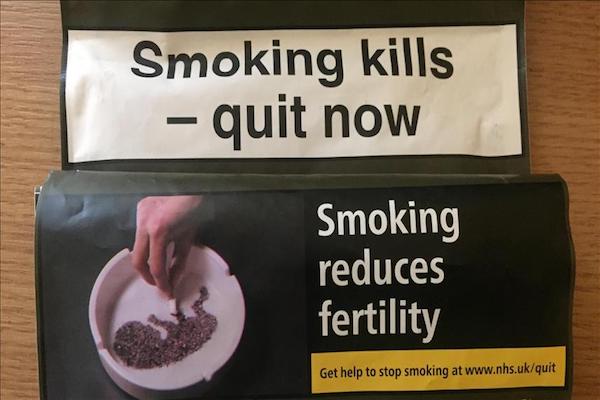 The new moves come as the country’s health bill for smoking-related diseases rises. The new bans -- including the scrapping of sales of smaller packs of 10 cigarettes -- will come into force on 20 May. New, standardized packs of cigarettes and rolling tobacco will be sold in the same dark brownish color with large anti-smoking photos and health warnings prominently displayed. Some flavored cigarettes and rolling tobacco will also be made illegal in the U.K. under the new changes.

Menthol cigarettes will be completely banned by 2020 as they are seen as one of the early steps to taking up the smoking habit. According to National Health Service (NHS) figures, some 78,000 people died of conditions attributed to smoking in 2014. The statistics also claim around 4,700 people were admitted to hospitals for conditions that could be caused by smoking in 2014/15. Included in the new changes, the minimum size of hand-rolling tobacco packages will also be increased to 30 grams which will cost more. This is a bid to reduce the number of low-income smokers, such as students.

Currently, a pack of 20 cigarettes cost on average £9.34 ($11.57) according to Tobacco Manufacturers’ Association data for 2016. This is the second-highest price in Europe. With the new legislation, the cheapest cigarette packs will be sold for £8.82 ($10.92) and the lowest price for hand-rolling tobacco will be around £12 ($14.85). About 77 percent of the price of a packet of cigarettes in the U.K. is taxation. The U.K. is only the second country in the world and the first in Europe to require cigarettes to be sold in plain, standardized packaging, after Australia. Smoking costs the NHS approximately £2 billion ($2.5 billion) a year, according to anti-tobacco charity, ASH. Tobacco kills around six million people each year, the World Health Organization (WHO) has stated. More than five million of these deaths are the result of direct tobacco use while more than 600,000 are of non-smokers being exposed to second-hand smoke.