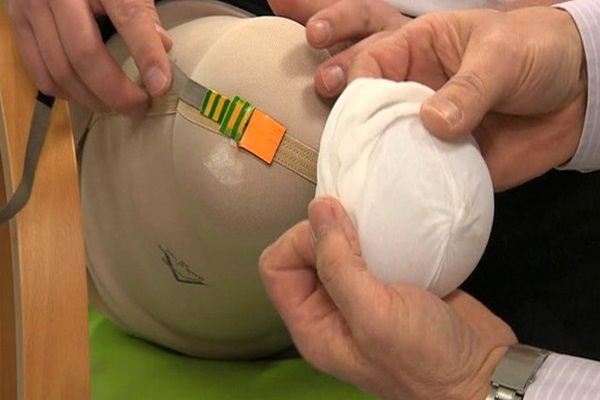 The technology is being developed initially for amputees who suffer rubbing against their artificial limbs. If the Southampton University work is successful the sensors may also be used for others at risk, such as wheelchair-users and those confined to bed. The new technology could be available to NHS patients within three years. Pressure sensors are already used, but this Medical Research Council-backed project - in partnership with the prosthetics firm Blatchford - differs in that it is able to detect rubbing as well as downward pressure. This could make it better at detecting sores at an earlier stage. Richard Bradbury, 26, who is a technician at Blatchford and had an amputation below his right knee soon after he was born and then above the knee in his teens, has long experience of discomfort caused by pressure and rubbing against his prosthetic limb."It can be very distressing. "When I was younger and getting bigger and growing more I had up to four or five legs a year. And because you're getting bigger you're not going into the socket as much. And it can rub, it can create sores, blisters." 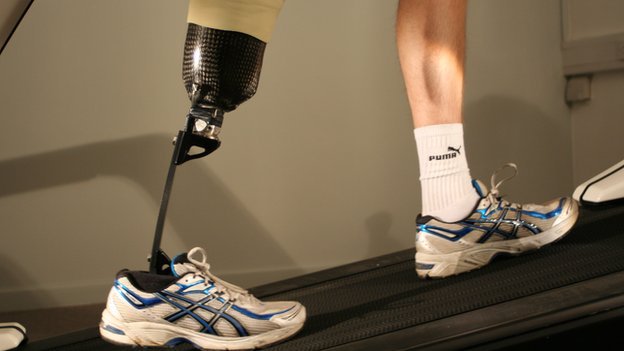 It is thought there are about 50,000 lower limb amputees in the UK. A report in 2000 by the Audit Commission said nearly one in four did not use their prosthetic limbs as much as they would like - often because of pain and discomfort. Dr Andy Franklyn MillerSports medicine specialist

Dr Andy Franklyn Miller, a sports medicine specialist who has worked extensively with military amputees, said it was still a serious problem. "A limb that doesn't fit because of pain means a limb that can't be worn. And often that then accompanies an increase in weight which means the socket that the body fits into, no longer fits. And so it's a real catch-22." The sensor is thin and flexible like a small golden postage stamp. It is taped to a liner - essentially a cushioned sock - which is then placed in the socket connecting the stump and the artificial limb. It sends that information to researchers and clinicians who can monitor the pressure peaks and troughs as the patient walks, and see if any adjustments are needed to prevent discomfort or pain. The researchers are planning to develop a system of traffic light alerts for smartphones, warning of potential problems. That may mean just putting on an extra sock for padding, because the stump can change shape during the course of the day. Or it may mean a visit to a clinic for further assessment.

Dr Liudi Jiang from the University of Southampton, who is leading the project, says the sensors could act as what she calls a "second skin". "A large number of lower limb amputees may suffer from nerve damage and they have reduced skin sensation. That means they don't feel the pain or the tissue injury as effectively as we do. And it may be too late, because once that soft tissue is compromised it could lead to infection and could be really serious." Joe McCarthy, who does prosthetic research and development at Blatchford, hopes in time the sensors will mean those wearing artificial limbs will not have to worry about keeping a good fit. "The next stage will be to develop some sort of system to adjust the fit of the socket so we'll have a system that can react as the person's wearing the leg saying, 'OK, you're a little bit far into this socket,' and it can literally pump up some pads or adjust the fit in some way so the person doesn't have to go to the centre." The researchers say the sensors may be available to NHS patients in as little as three years. Dr Jiang believes this technology may have many more uses which could prevent pain, infections and even amputations. "This is a platform technology and we envisage it could be applicable in many other healthcare sectors such as smart shoe insoles for people with diabetes, or wheelchairs or mattresses - wherever the body rubs."