The new figure was announced as part of a push to bolster public health and NHS cancer services. 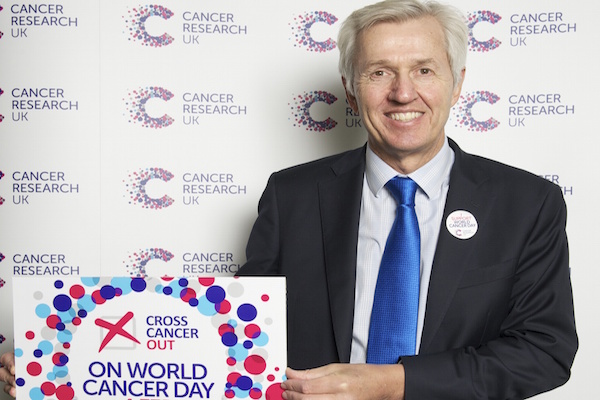 Nick de Bois, MP for Enfield North, is backing a cross-party appeal to save the lives of more cancer patients, as news comes that one in two people will be diagnosed with the disease at some point in their lives. The new figure was announced as part of a push to bolster public health and NHS cancer services. Nick de Bois attended a parliamentary event held by Cancer Research UK to mark World Cancer Day on 4th February and encourage more MPs to support their Cross Cancer Out campaign. In the run up to the General Election, the charity is calling on candidates to support better diagnostics, effective treatments, and earlier diagnosis. Nick is a member of the All-Party Parliamentary Group on Cancer.

Nick said: “As we know cancer can have such a devastating impact on people’s lives and has to be a top priority. Catching it early and treating it better are key and, thanks to £12.7 billion extra NHS investment from the Government and hard work from Cancer Research UK, we are taking the fight to cancer. The political drive has to match the pace of progress in research and that’s why I’m backing the efforts to Cross Cancer Out.”