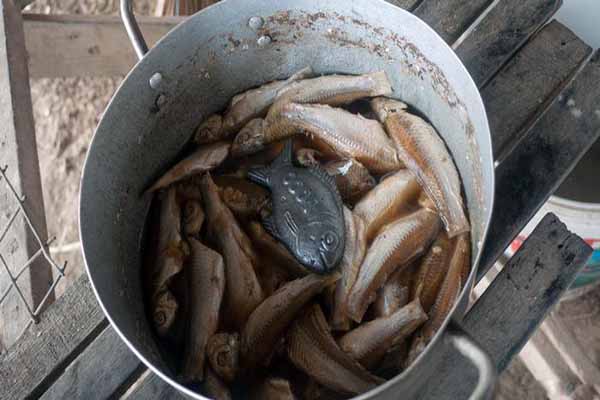 These days, when Soth Sokhoeun cooks for her family in the village of Prek Ho East 1, outside of Phnom Penh, she pulls down a small iron ingot from a shelf on her low roof and throws in it her pot. She remembers the bad old days when she and her family often felt less than 100 percent. "I used to get sick easily and I was pale, sometimes dizzy," said the 33-year-old. But then a team of researchers from Canada said her symptoms were due to an iron deficiency. They gave her the small iron fish and recommended she drop it into her pot while she prepared meals for her husband and two sons. They told her it would add much-needed iron to her food.

"Since I've been using it, I have more energy and I'm not as pale as I used to be," she said. "My mood has improved, too."

The small fish Sokhoeun's been using, about the size of a bar of soap, is a simple and very promising strategy to tackle the worldwide problem of iron deficiency and iron deficiency anemia. Simply putting the little fish in a cooking pot for 10 minutes, and adding lime juice to aid in absorption, can provide about 75 percent of a person's daily iron requirement and increase the body's iron stores.

Anemia in its different forms affects around 1.6 billion people globally. While it doesn't discriminate, it is especially prevalent in the developing world. Anemia can result from several factors, including parasites or even genetic makeup. But a lack of dietary iron is a leading culprit. The World Health Organization (WHO) says about half of anemia cases are caused by iron deficiency. A 2010 study in Cambodia, the most recent available, showed that 55 percent of children between six months and five years of age don't get enough iron. More than 40 percent of pregnant women in the country are iron deficient or anemic. The health effects are significant: symptoms include fatigue, lethargy, pallor as well as poor mental and motor performance. In children, it can hurt their cognitive development. All of these negatively impact short- and long-term productivity, not to mention the quality of people's everyday lives. According to Hou Kroeun, deputy country director at the Cambodian office of Helen Keller International, an NGO working in the field of nutrition, the Cambodian diet is traditionally made up of vegetables, fruit and rice, sometimes fish. But often, the quality and quantity of these foods is low.

"They may eat fish and vegetables, but probably not enough to provide enough iron for the body's needs," he said.

In many parts of the world, governments and NGOs have focused on iron supplements in the form of pills or sprinkles. Cambodia is no exception. But pills are relatively expensive, and can upset people's stomachs. That means many people stop taking them. Distribution is also an issue - getting supplies to people in remote areas is not always easy.

More iron in the diet

These are the kinds of issues Christopher Charles was thinking about when he came to do biomedical research in a rural Cambodian village. Then a student at the University of Guelph in Canada, Charles thought one solution might be to encourage Cambodians to cook with iron pots. Iron from the pots would leach into the food while it cooked. But Cambodians don't like iron pots - they are expensive, heavy and unsightly when they rust. Almost everyone uses aluminum.

Then Charles came up with the idea of adding an iron ingot to boiling water. But he found that Cambodian women - and it's usually women doing the cooking - didn't like the idea of throwing an ugly chunk of iron into their soups. "So, why don't we make this more culturally appropriate?" said Lauren Ramsay, a science graduate student at the University of Guelph who is working on the iron fish project in Cambodia. Charles tested lots of different designs until he came up with a local Cambodian fish that often symbolizes luck, Ramsay said. The fish shape was more appealing to the cooks, who needed to add a little lime juice to their food to help aid in iron absorption. Since lime juice is common in Cambodian food, that was not a big hurdle. After a few months, the researchers tested iron deficiency rates in the villages where the metal fish were being used, checking hemoglobin concentrations and serum ferritin, which can indicate changes in anemia status. Over the course of the trial, Ramsay said, anemia rates among people cooking with the iron fish were reduced by half.

Off a pockmarked dirt road on the outskirts of the Cambodian capital, a family-owned metal workshop features a tall, hissing furnace in the corner. It spits out a continuous shower of sparks that look dangerously close to catching the roof on fire. Two men carry molten metal out of the furnace and pour it into nearby molds. It's here where the iron fish are made from recycled car parts, often from metal brake pads that employees break up with hammers before throwing them into the furnace. While the molds here are in the shape of a fish native to Cambodia, in other countries, they could be made into any shape considered lucky or appealing.

Lao Fun runs the metal workshop along with her husband and has begun cooking with the fish herself. She said her family has felt better since they've been using it, and she notices she has more energy these days. "All I can do is provide high-quality metal fish," she said. "I think it works since I can see a change in my family's health, but scientists need to do more research."

That's what is happening now. Canadian researcher Ramsay is organizing a new trial, due to begin soon, that will test the 1,500 iron fish across ten villages. The plan is to convince the Cambodian government and big NGOs that the fish work. They have expressed interest, but are still somewhat skeptical and want more hard data. For now, the government and NGOs like Helen Keller International are still focused on improving diets, fortifying foods and distributing supplements, like iron pills. Ramsay hopes the study, set to be finished in May 2015, will get the big health NGOs and the Ministry of Health on board. "Hopefully, we can quash that skepticism," she said. The Lucky Iron Fish team got a boost last month when the project was honored by former US President Bill Clinton at the Clinton Global Initiative University conference in Arizona. But another challenge is to get Cambodians themselves to sign on to the idea. While the price tag - $5 (3.60 euros) for five years of use - might seem like a bargain, for many rural Cambodians, it's a significant investment to make for a product they're unfamiliar with."People want to see its effectiveness first," said San Soeurn, the village chief of Prek Ho East. "I want them to use it, but they say they need to get more money." But mother-of-two Soth Sokhoeun doesn't need any more convincing. She says the expense is worth it for the change she's seen in her family. She's been spreading the word to her neighbors, although with mixed success. "Some still think it's a little weird to put an iron fish in your pot," she said.DW.DE