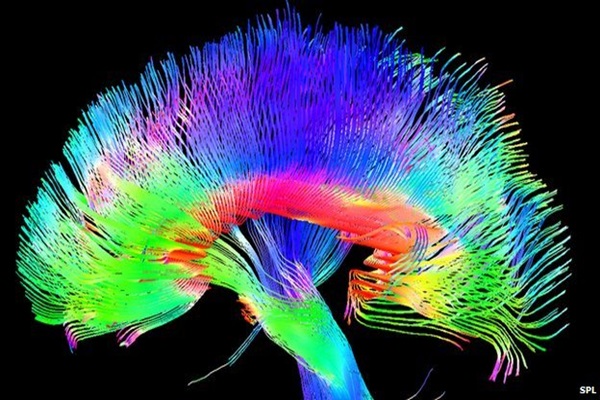 Participants' brain scans revealed that artists had increased neural matter in areas relating to fine motor movements and visual imagery. The research, published in NeuroImage, suggests that an artist's talent could be innate. But training and environmental upbringing also play crucial roles in their ability, the authors report. As in many areas of science, the exact interplay of nature and nurture remains unclear. Lead author Rebecca Chamberlain from KU Leuven University, Belgium, said she was interested in finding out how artists saw the world differently. "The people who are better at drawing really seem to have more developed structures in regions of the brain that control for fine motor performance and what we call procedural memory," she explained. In their small study, researchers peered into the brains of 21 art students and compared them to 23 non-artists using a scanning method called voxel-based morphometry.

These detailed scans revealed that the artist group had significantly more grey matter in an area of the brain called the precuneus in the parietal lobe. "This region is involved in a range of functions but potentially in things that could be linked to creativity, like visual imagery - being able to manipulate visual images in your brain, combine them and deconstruct them," Dr Chamberlain told the BBC's Inside Science programme. "I had a very arty family. My mother was an art historian and my dad a photographer.Participants also completed drawing tasks and the team looked at the relationship between their performance in this task and their grey and white matter.

Those better at drawing had increased grey and white matter in the cerebellum and also in the supplementary motor area - both areas that are involved with fine motor control and performance of routine actions. Grey matter is largely composed of nerve cells, while white matter is responsible for communication between the grey matter regions. But it is still not clear what this increase of neural matter might mean. From looking at related studies of other creative people, such as musicians, it suggests that these individuals have enhanced processing in these areas, Dr Chamberlain added. "It falls into line with evidence that focus of expertise really does change the brain. The brain is incredibly flexible in response to training and there are huge individual differences that we are only beginning to tap into."

A life-size drawing of the giant squid specimen in the NHM collection, painted in fresh squid ink  Another author of the paper, Chris McManus from University College London, said it was difficult to distinguish what aspect of artistic talent was innate or learnt. "We would need to do further studies where we look at teenagers and see how they develop in their drawing as they grow older - but I think [this study] has given us a handle on how we could begin to look at this."

Ellen Winner of Boston College, US, who was not involved with the study, commented that it was very interesting research. She said it should help "put to rest the facile claims that artists use 'the right side of their brain' given that increased grey and white matter were found in the art group in both left and right structures of the brain". "Only a prospective study could get at the question of innate structural brain differences that predispose people to become visual artists, and this kind of study has not been done as it would be very difficult and very expensive to carry out."