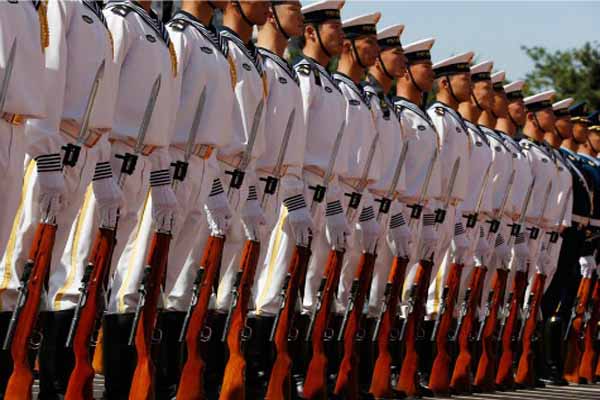 Global military spending dropped in 2012 for the first time in more than a decade thanks to deep cuts in the United States and Europe which made up for increases in countries such as China and Russia, a leading think-tank said on Monday. Big powers the United States and its European allies face tight budgets in an economic downturn and have scaled back involvement in conflicts in Iraq and Afghanistan. The world's second biggest economy China, however, is ramping up spending and registered 7.8 percent growth in 2012 from the year before, up 175 percent from 2003. Military expenditure as a whole fell 0.5 percent to $1.75 trillion last year in the first decline in real terms since 1998, the Stockholm International Peace Research Institute (SIPRI), which carries out research on international security, armaments and disarmament, said in a statement.

"We are seeing what may be the beginning of a shift in the balance of world military spending from the rich Western countries to emerging regions," said Sam Perlo-Freeman, director of SIPRI's Military Expenditure and Arms Production Programme.

Military expenditure in the United States, the world's biggest spender by far with a budget about five times that of China, fell 6 percent and stood below 40 percent of the global total for the first time since the collapse of the Soviet Union more than 20 years ago, SIPRI said.

The United States pulled its troops out of Iraq more than a year ago and is winding down its war in Afghanistan under a plan for a pull-out by the end of 2014.

The Pentagon is seeking to cut hundreds of billions of dollars in costs and this month, new Defence Secretary Chuck Hagel warned the U.S. military to brace for a new round of belt-tightening.

In Europe, austerity measures prompted by the financial crisis that started in 2008 have forced NATO members to cut back spending by 10 percent in real terms.

"All the indications are that world military spending is likely to keep falling for the next two to three years - at least until NATO completes its withdrawal from Afghanistan at the end of 2014," Perlo-Freeman said.

Global military spending fell significantly after the Cold War ended, reaching a nadir in the mid-1990s, but picked up pace sharply after the Sept. 11 attacks on the United States.

The global total remains above the Cold War peak.

While the United States and its allies still account for most of the expenditure - NATO members spent more than a trillion dollars last year - regions such as Asia and eastern Europe ramped up outlays, SIPRI said.

In the works for China's military are new submarines, ships, missiles, a stealth fighter and aircraft carrier combat groups.

China has repeatedly said the world has nothing to fear from its military spending, but governments from Tokyo to Mumbai are worried about the capabilities and what appears to be the greater belligerence of China's military.

Over the past six months, China's stand-off with Japan over a series of uninhabited islands in the East China Sea has become more acrimonious, and has already led to calls in Tokyo for Japan to alter its pacifist constitution.

At the same time, Vietnam, the Philippines and other Southeast Asian nations have challenged Beijing over claims to swathes of the South China Sea that could be rich in oil and gas.

China is now the world's fifth-largest arms exporter, replacing Britain in the list of the top five arms dealing countries between 2008 and 2012, SIPRI said in a March report. Pakistan was the main recipient of its goods, the report said.

The administration of U.S. President Barack Obama says it is shifting its security focus to the Asia-Pacific region.

Military spending is up around 8 percent in the Middle East and North Africa. In a region transformed by popular uprisings and reeling from a bloody civil war in Syria, Western allies such as Saudi Arabia and Oman have accounted for much of the increase.

In North Africa, countries such as Algeria have bolstered spending in the face of rebel threats, SIPRI said.

Russia's military spending rose 16 percent in 2012, which analysts said reflected President Vladimir Putin's efforts since he returned to power last May to bolster the armed forces and improve weaponry