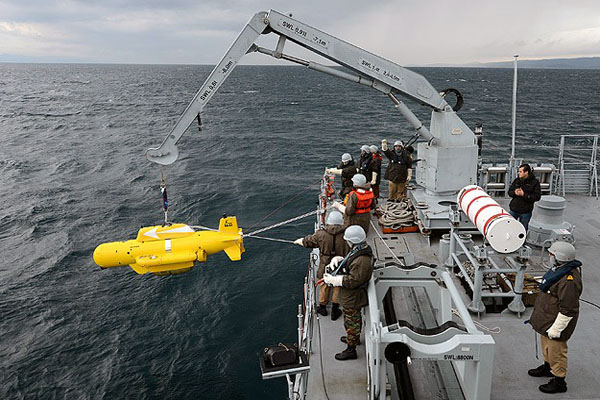 Some military elements of Turkey and Germany and Greece have attending the operation. “Nusret 2013 Military Drill” was opened to press on Tuesday. Many brand new technologies are being used in the operation. 29 military observers from 12 countries are also watching the operation. Around 50 mines were totally inactivated during the Tuesday phase of the drill. Mines was detected one of the most advanced technologies 7 mine counter ( MKT ) vessel, one mine layer ship, one frigate, two patrol boats, one mine gathering ship, one helicopter, Underwater Defense ( SAS) team, a C- 130 type plane, Coast Guard boats are also attending the drill. Nusret (Eng. 'the help of God') was a naval ship of the Ottoman Navy, which served as a minelayer during the Gallipoli Campaign, and later fulfilled various roles in the Turkish Navy; as minelayer (1927–1937), diver vessel (1937–1939) and tender (1939–1955). She was laid down in 1911 and launched from Schiff & Maschinenbau AG 'Germania' at Kiel, Germany on December 4 of that year.

She was commissioned into the Ottoman Navy in 1913, captained by Lieutenant Tophaneli Hakki (Guverte Kıdemli Yuzbası Tophaneli Ibrahim oglu Hakkı) under the command of Lieutenant-Colonel Geehl. The Nusret played a pivotal role in the Dardanelles Campaign, laying 26 mines in an unexpected position in February 1915 just prior to the ill-fated invasion which sank HMS Irresistible, HMS Ocean and the French battleship Bouvet, and left the British battle cruiser HMS Inflexible badly damaged.

After World War I Nusret was laid up in Istanbul until 1926/7 when she was refitted at Gölcük. In 1937 she became the diving vessel Yardin and in 1939 reverted to Nusret as a tender. In 1955 she was decommissioned and again laid up, with the intention to convert her to a museum ship. However, in 1962 she was sold to commercial buyers who had her converted to a cargo motorship, unrecognisable as the former minelayer, entering service as Kaptan Nusret in 1966. In April 1989 she sank near Mersin Harbour, and lay submerged for 10 years.

In 2002 the wreck of Nusret was acquired by the Municipality of Tarsus, Mersin Province for reconstruction ashore as a museum ship, opened in about 2008.