Marmaray, the railway tunnel underneath the Bosphorus Strait, which has opened on Tuesday, will be free of charge for 15 days. 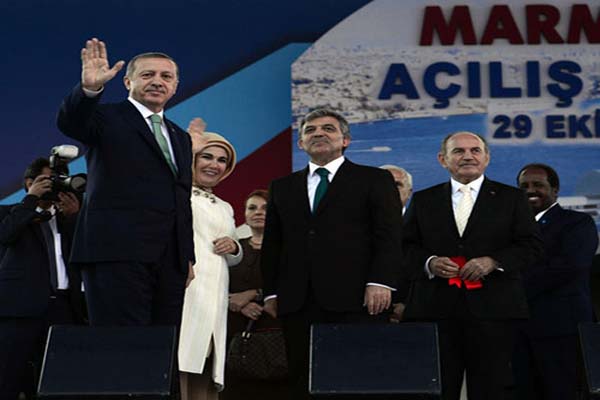 "The project of the century, Marmaray, has opened on the 90th anniversary of the foundation of Republic of Turkey," said Erdogan. "It both dignifies Republic of Turkey and also we have proved to have fulfilled such a project with a democratic republic in stability and solidarity."

Marmaray will be free of charge for 15 days, said Erdogan.

The 1.4 kilometer tunnel, which runs 50 meters beneath the Bosphorus Strait, is expected the lighten the load of two million commuters who use the two bridges that connect the Asian and European sides of the city. Istanbul’s mayor Kadir Topbas has said that the new service will be able to transport 150,000 commuters per hour.

The project is also expected to reduce the amount of greenhouse gases being produced by the city’s traffic.

"The Marmaray project unites...the continents of the historic Silk Road," Transport Minister Binali Yildirim said ahead of the opening of the 5.5 billion lira ($2.8 billion) tunnel.

The Marmaray project is just one of many that will transform Istanbul and Turkey into a modern superpower. Other projects include a 50-km canal to rival the Suez that would render half of Istanbul an island, an airport that will be the world's busiest and a giant mosque atop an Istanbul hill.

Atomic power stations are on the drawing table. A third bridge over the Bosphorus, whose construction has already felled 1 million trees, is under way.

Despite his critics, the mastermind behind these projects, Prime Minister Recep Tayyip Erdogan argues his policies meet the needs of a rapidly expanding and increasingly affluent population.