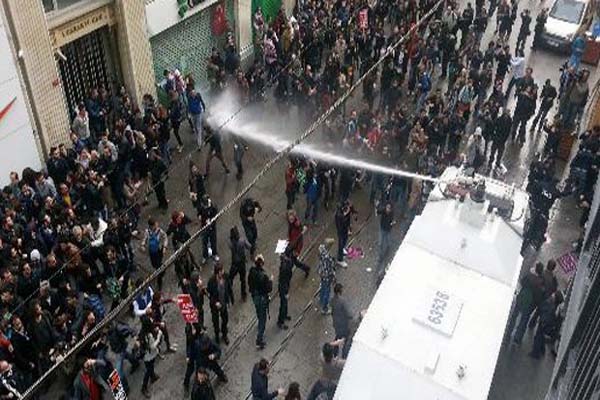 Movie critics Berke Göl, Hazar Berk Büyüktunca, Özgür İpek and Mehmet Ferit Aka had been freed after their testimonies were taken on April 7, hours after protests that ended with the police’s fierce intervention. The group included cinema artists and cinema lovers. After completing the investigation, the prosecutor prepared the indictment and demanded six years imprisonment for the four suspects on charges of “struggling against police doing their duty,” and “violating the rally and march law.” Latest photos of demolition work at Istanbul's historic Emek Theater. The prosecutor said the four suspects were in the group of 250 protesters who tried to enter the building where the Emek Theter was once located and resisted the police by not refusing to leave the area despite the police’s repeated warnings.

The building housing the historic Emek Theater is set to be turned into a shopping centre, while the cinema itself will be “lifted” to another floor according to the project.

The renowned Greek-born director Costa-Gavras was among the many filmmakers, actors and critics attending the protest.

The police forces were criticized for using tear gas, water cannon and batons against the group. Police said protesters kicked and threw stones at them, and also resisted arrest.