Were not getting out of here 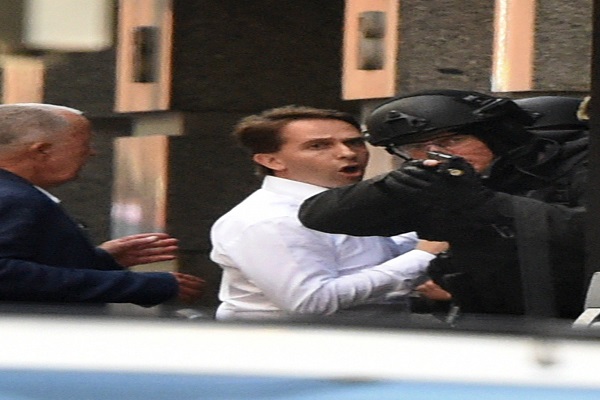 Two hostages run to safety outside the Lindt Cafe, Martin Place on Monday after escaping the gunman who had held them for nearly six hours. Photograph: Mark Metcalfe/Getty Images

As the hours dragged on and their captor became more erratic and his fury more frightening, hostages began to despair. They complied with demands they made videos, begged for release and then ran for their lives

The gunman knew his message was not getting out, and he grew suddenly more angry. For hours he had roiled across the tiny cafe, erratic and unpredictable. Armed with a short-barrelled shotgun, he held his terrified captives beholden to his will. Now, he saw that his dictated phone calls to media outlets weren’t being played live to air as he insisted, the videos he had forced his hostages to shoot weren’t being broadcast, and his inchoate demands weren’t being heard.

He turned his fury upon those he held captive. “We’re not getting out of here,” one hostage said to another, “none of us are. We are going to die here.” Inside the Lindt cafe Guardian Australia has spoken with family members and friends of several of the hostages held by Man Haron Monis inside the Lindt cafe in Martin Place, in Sydney’s CBD.

Separately, they have described a terrifying and unpredictable 17-hour ordeal, where Monis forced hostages to film videos outlining his demands, and press-ganged cafe staff to act as his sentries, escorting customers to the toilet and back to the shop floor.

The first anybody in the Lindt cafe knew something was wrong was when the manager of shop recoiled in horror as Monis pointed a gun at him. Previously, Monis had been seated, engaged in conversation with the manager, the unremarkable Monday-morning hubbub of the cafe all around them. The bag he carried sat hidden at his feet. Customers paid scant attention. Then, almost without warning, Monis was standing. He drew a short-barrelled shotgun, and bellowed at customers to stand with their hands up.

He screamed at them that he was a representative of Islamic State and that this was a terrorist attack. He told them there were bombs in the building, and that they must do as he instructed.

Monis locked the doors of the cafe and forced his hostages to stand still, their hands high in the air. They stood in stunned silence, and stared at the man before them as he menaced them with a gun. Almost immediately, the alarm was raised outside. When a woman outside came to the automatic doors, banging on them to be let in, Monis waved the gun in her direction, a silent warning that no one was to come in. Or out. The woman alerted police, who quickly surrounded the building. Martin Place, busy for a year-end Monday morning, was hastily evacuated.

The first clue the wider world was given came shortly after 10am, when NSW police sent an anodyne tweet: “A police operation is underway in Martin Place, Sydney’s CBD. People are advised to avoid the area.” Inside, Monis was spreading terror amongst his captives. Some people screamed, while others burst into tears, sobbing uncontrollably. At least one hostage began to vomit in fear.