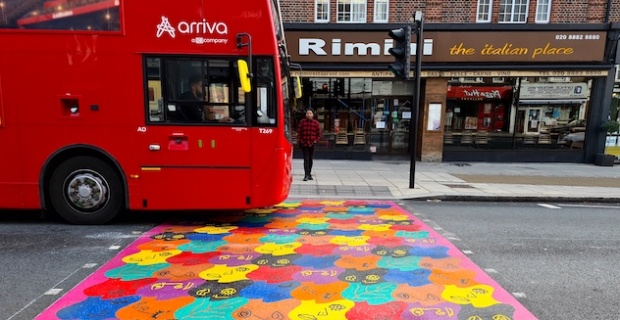 Performers, food producers and party fans were out in force Wednesday (23 June) to launch the official countdown to A Month of Sundays, a celebration of food and culture in Enfield. Enfield Council’s A Month of Sundays will be a series of street festivals over August’s five Sundays, bringing out the best in the borough’s food businesses and celebrating local heritage and the arts.The Deputy Leader of the Council Cllr Ian Barnes was met at Edmonton Green by a full cast of performers including entertainer Sissy Lea, Platinum Performing Arts, a Steel Pan band and Brazilian Fantasy Carnival band. There were also Mauritian and Caribbean food displays from Edmonton Green Shopping Centre businesses, to give passers-by a flavour of what can be expected later this summer.

Cllr Barnes explained further. He said: “The aim of A Month of Sundays is two-fold. We naturally want to celebrate the extraordinary food culture, heritage and diversity of Enfield. But we also want to support our businesses, retail centres and local communities as we recover from the last 18 months. The event will allow businesses to sell their goods and entertain thousands of visitors from licensed stalls, and showcase the best that Enfield has to offer. It will be a fantastic opportunity to say that Enfield is back in businesses and we can’t wait to welcome residents and visitors to our town centres.

“The event fits in with the Council’s Culture Connects strategy, which aims to strengthen, enrich and communicate about Enfield’s creative industries and culture. We know that investing in culture brings both social and economic benefits, both of which are so important as we seek to renew and rebuild.”

The event schedule is:

Alongside the food stalls, Enfield Council will be providing free entertainment by some of the borough’s finest acts. In addition, Forty Hall will also be participating in the celebration, hosting a number of exciting activities on 8 August including a farmers’ market, a tour of their vineyard and a talk on beekeeping. The Museum of Enfield is also touring with its exhibition entitled From Enfield to Fork, an exciting exhibition about food heritage in the borough.

Keywords:
Deputy Leader Of The Council Cllr IanEnfield’s Summer Of Food And Arts
Your comment has been forwarded to the administrator for approval.×
Warning! Will constitute a criminal offense, illegal, threatening, offensive, insulting and swearing, derogatory, defamatory, vulgar, pornographic, indecent, personality rights, damaging or similar nature in the nature of all kinds of financial content, legal, criminal and administrative responsibility for the content of the sender member / members are belong.
Related News