A Shantel show can be described but it has to be experienced. 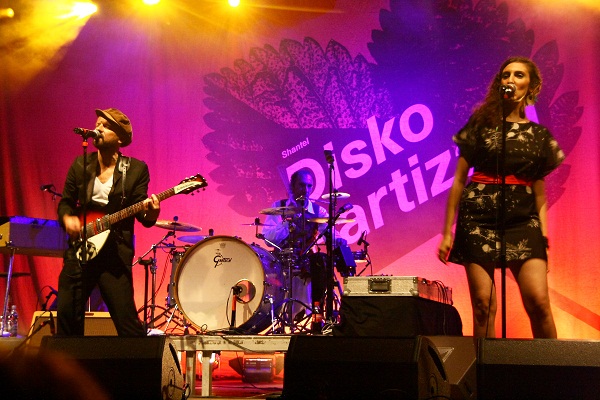 Shantel returns London on a once-again massive tour (see below) with his world famous Bucovina Club Orkestar to bring a Balkanised, turbo-charged live show that has attracted fans from all countries and ages and had them all dancing in an instant. Having been „the King of the Balkan Castle“ (iDJ Mag) for many years Shantel’s latest track and video „The Kiez Is Alright“ suggests a new direction, a retro rock n‘ roll base with a twist of of Balkan rhythm and Kraftwerkesque electronica. http://youtu.be/bw-ELa_G_ts  Is Shantel about to hit us with his next sound?  Is Balkan, as Shantel has always maintained, now beyond exotic, and just part of any band‘s musical palette?

A Shantel show can be described but it has to be experienced. “When he climbs over the barrier and almost drowns in the crowd, even experienced festival goers look irritated. Shantel puts his finger on the mouth and indicates the audience to sit down, he in the middle of thousands of people, captured by one spotlight. And then he starts singing slightly in his microphone “Anarchy and Romance, we don’t need no guidance…” until the musicians on stage start a massive bass- and brass-thunderstorm. This is the moment where the crowd starts dancing again with Shantel still in the middle of them – holding hands with a sweat-soaked girl” (FAZ) In conclusion: “Whoever has seen one of SHANTEL’s immensely successful concerts, knows: Everyone will dance ecstatically and euphorically.” (FAZ)

Surprising songs, unconventional ballads & hedonistic party hits meet the spirit of the 60s Garage Rock, Beat and Electro-Funk, vintage electric guitars, drums and a Fender Rhodes-piano rock together with the brass players of SHANTEL’s live band. In a time of short-lived trends and in a globalized world, SHANTEL turns well-established pop- and rock-clichés upside down: “Yeah, baby! It feels like a Super Bad Day but Our Kiez Sounds Alright! “

Support comes from The Roustabouts, spinning everything from Electro-Swing and Balkan Beats to Tongue-in-cheek Mashups of the guiltiest pleasures in Pop. http://www.theroustabouts.co.uk/