Scandal, Will Smith slapping Chris Rock at the Oscars! Latest from Oscars

Many celebrities condemned the incident at the 94th Academy Awards, while some were also critical of Rock's joke about Jada Pinkett Smith's appearance. 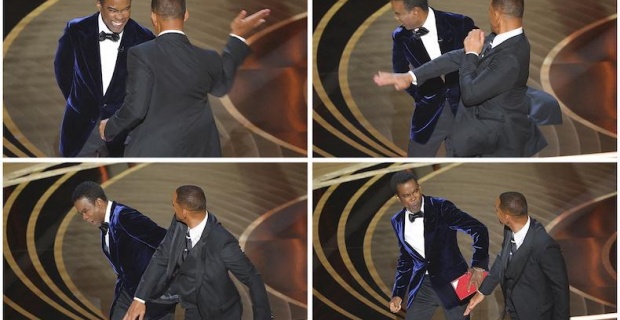 AVRUPA-Will Smith's slap of Chris Rock stunned those present for last night's Oscars ceremony and instantly stirred intense reaction online, including from a litany of celebrities.The actor's on-stage confrontation with the comedian dominated the 94th Academy Awards on Sunday after Rock made a joke about Smith’s wife, Jada Pinkett Smith.In the hours after the altercation, celebrities expressed a mix of shock, disappointment and outrage over the incident. Some also expressed support for Smith, who went on to win the best actor award for his star turn in "King Richard."In a since-deleted tweet, director Judd Apatow expressed strong criticism of Smith's actions, saying: "He could have killed (Rock). That’s pure out of control rage and violence.""They’ve heard a million jokes about them in the last three decades. They are not freshman in the world of Hollywood and comedy. He lost his mind," the "Funny People" director said.Rock had made a quip as he prepared to hand out the award for best documentary. “Jada, I love you. 'GI Jane 2,' can’t wait to see you,” the comedian said — an apparent reference to Pinkett Smith’s shaved head, with the actress having revealed back in 2018 that she has alopecia, a condition causing hair loss.The remark received a swift reaction from Smith, who walked up on stage and smacked Rock across the face, before telling the comedian to “keep my wife’s name out your f-----g mouth.”Smith later apologized to the film academy and to fellow nominees as he accepted the best actor Oscar for his role in “King Richard,” where he plays the father of tennis stars Venus and Serena Williams. 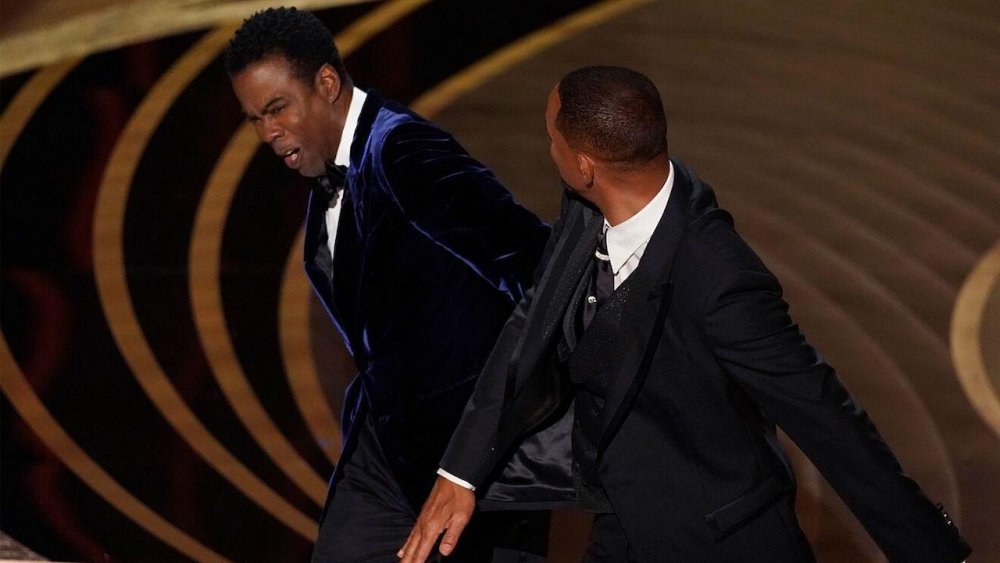 “Art imitates life. I look like the crazy father, just like they said about Richard Williams. But love will make you do crazy things,” he said in a tear-filled speech. He did not offer a direct apology to Rock, who police said declined to file a report over the incident.

“It was crazy,” actor LaKeith Stanfield told Variety at the Vanity Fair Oscars Party following the awards show. “I don’t know, it was surreal.”

Also speaking from the after-party, actor Minnie Driver said it was "hard to watch" the altercation unfold. "We were all privy to something that was emotions running really high," she said, adding that she hoped "they will make up later."

“Violence isn’t ok. Assault is never the answer,” actress and director Sophia Bush tweeted. However, she also expressed criticisms of Rock's joke, noting: "This is the second time that Chris has made fun of Jada on the Oscars stage, and tonight he went after her alopecia."

“Punching down at someone’s auto-immune disease is wrong. Doing so on purpose is cruel. They both need a breather,” she said. 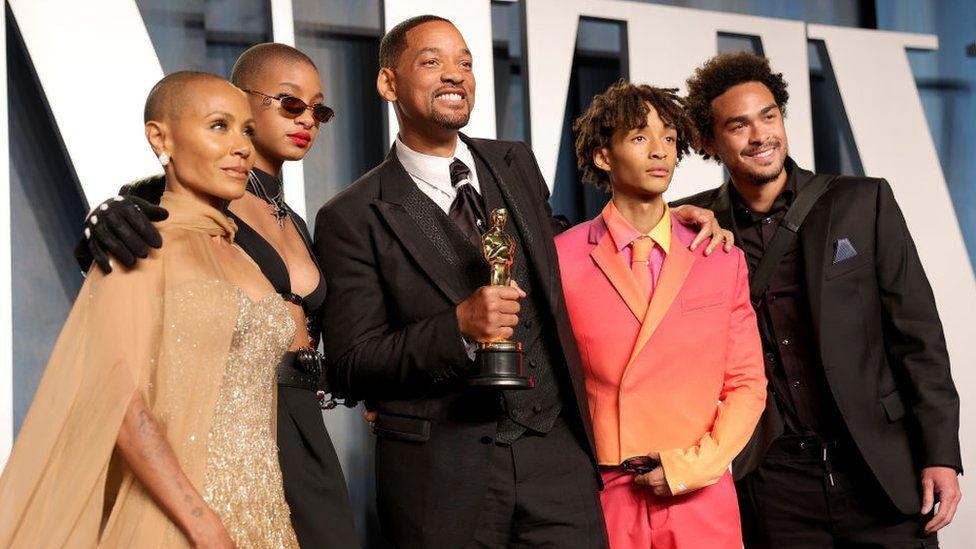 Bush appeared to be referring to the 2016 Oscars, where Rock poked fun at Pinkett Smith who had been boycotting the ceremony as part of the "Oscars So White" movement. “Jada boycotting the Oscars is like me boycotting Rihanna's panties. I wasn’t invited,” he had said at the award ceremony.Actor Mia Farrow defended Rock's remarks, however, tweeting: “It was just a joke."“Jokes are what Chris Rock does. Always has been edgy. This was a mild joke for him. And I love GI Jane," Farrow said.NBA star Stephen Curry, who served as an executive producer of "Queen of Basketball," the short that won the award for best documentary, said he was "shocked about the whole thing.""But in all the unnecessary drama, at least we got the line of the night from Denzel," he said, referring to words of wisdom Smith said actor Denzel Washington had offered him before his Oscar win: "At your highest moment, be careful. That's when the devil comes for you."Actor and model Jodie Turner-Smith said she was still “processing” the incident, writing: “I have second hand embarrassment for all involved.”

Some celebrities also appeared to express support for Smith, with Jaden Smith, Will and Jada Pinkett Smith's son, among them."And That's How We Do It," Jaden Smith wrote in a tweet later in the evening. It was unclear exactly what he was referring to.Meanwhile, rapper and actor 50 Cent appeared to make light of the incident, sharing a photo of the altercation with the words: “B----don’t you ever play with me. LOL.”Speaking with U.K. TV show "Good Morning Britain" in a red carpet interview, former One Direction member Liam Payne also appeared to defend Smith's actions, saying: “I believe whatever he felt that he did, he had the right to do."Calling Smith's speech and tearful apology over the incident a "powerful moment" where he witnessed "one of the world's best emoters...speak from the heart," he said he would "rather take the beauty out of the situation than take the pain."In a short statement following the incident, the Academy of Motion Picture Arts and Sciences said it “does not condone violence of any form.""Tonight we are delighted to celebrate our 94th Academy Awards winners, who deserve this moment of recognition from their peers and movie lovers around the world,” it said

Keywords:
Will Smith SlappingSlapping Chris Rock
Your comment has been forwarded to the administrator for approval.×
Warning! Will constitute a criminal offense, illegal, threatening, offensive, insulting and swearing, derogatory, defamatory, vulgar, pornographic, indecent, personality rights, damaging or similar nature in the nature of all kinds of financial content, legal, criminal and administrative responsibility for the content of the sender member / members are belong.
Related News