Rock band AC/DC 'We are not retiring' 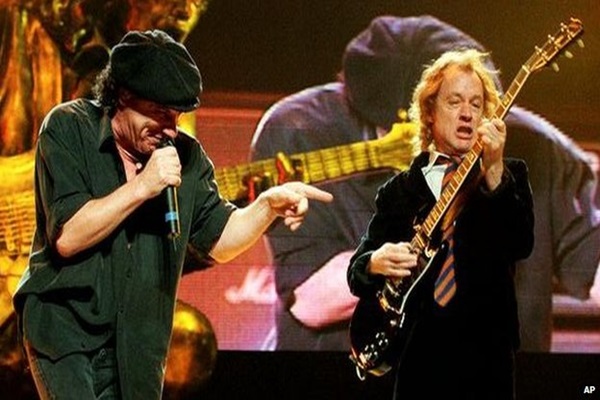 It had been rumoured the Australian band would split after a career spanning more than 40 years. However, a statement on AC/DC's website confirmed: "The band will continue to make music." The band are one of the highest-grossing rock acts of all time, selling more than 200 million albums. AC/DC formed in Australia in 1973 and their biggest-selling record has been 1980's Back In Black - the first with singer Brian Johnson after the death of former lead singer Bon Scott from alcohol poisoning. They are noted for creating some of the best-known guitar riffs in the rock catalogue, accompanied by lyrics full of sexual innuendo. A message on the band's website confirmed that Young would be taking a break after "forty years of life dedicated to AC/DC", but did not reveal details of his illness. "Malcolm would like to thank the group's diehard legions of fans worldwide for their never-ending love and support," said the band.

"In light of this news, AC/DC asks that Malcolm and his family's privacy be respected during this time."

Flamboyant frontman Brian Johnson lelaborated on their plans in an interview with The Telegraph. "We are definitely getting together in May in Vancouver. We're going to pick up some guitars, have a plonk, and see if anybody has got any tunes or ideas. If anything happens, we'll record it," revealed Johnson. On the subject of touring he added: "I wouldn't like to say anything either way about the future. I'm not ruling anything out." The Australian media had been awash with rumour and counter-rumour ahead of AC/DC's announcement. Entertainment journalist Peter Ford had suggested on radio station 3AW earlier this week that the band's next tour "will never happen". He added: "The boys have a pact that they will not get anyone else in the group. Nobody will be replaced and when somebody leaves, the group ends."Glasgow-born brothers Malcolm and Angus Young formed the band after moving to Australia with their family in the 1960s - Angus became famous for wearing a school uniform on stage. AC/DC's 15th international studio album, Black Ice, was an international hit following its release in 2008. The band's Black Ice tour, which ran from 2008 to 2010, took in 29 countries and was seen by five million people.