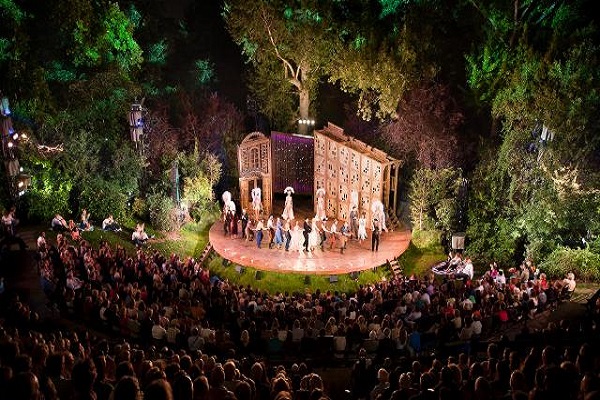 Rehearsals have now started, for  the Gershwins’ Porgy and Bess which will run at Regents Park Open Air Theatre from 17 July to 23 August with Opening Night for press on 28 July. Celebrated as a landmark piece of American theatre with iconic songs including ‘Summertime’, ‘I Got Plenty of Nothing’, ‘I Loves You Porgy’ and ‘It Ain’t Necessarily So’, Porgy and Bess will be directed by Regents Park Open Air Theatre’s Artistic Director Timothy Sheader, with a book adapted by Suzan-Lori Parks and a musical score adapted by Diedre L. Murray.

Porgy, a crippled beggar, is devoted to taming wild Bess and saving her from a life of ruin. Yet new beginnings give way to temptation as Bess is haunted by the demons of her past.

Rufus Bonds Jr is an American actor who has appeared in The Color Purple (US National Tour), Disney’s The Lion King (US National Tour) and the original Broadway production of Parade for which he was nominated for the Drama Desk Award for Outstanding Featured Actor in a Musical.

Phillip Boykin will reprise the role of Crown, for which he received Tony, Drama Desk and Outer Critics Circle nominations for the 2012 Broadway production (Tony Award, Best Revival of a Musical).

Cedric Neal is an American actor whose stage credits include After Midnight (Brooks Atkinson Theatre, Broadway) and Dreamgirls (Signature Theatre) for which he was awarded the Helen Hayes Award for Outstanding Supporting Actor. Cedric reprises the role of Sportin’ Life having played the role in the 2012 Broadway production of Porgy and Bess (Broadway).

Sharon D Clarke won the 2014 Best Supporting Actress Lawrence Olivier Award for her role as ‘Odessa’ in The Amen Corner (National Theatre) following previous Olivier nominations for Best Performance in a Supporting Role in a musical for both We Will Rock You (Dominion Theatre) and Ghost (Piccadilly Theatre). Other West End theatre credits include Hairspray (Shaftesbury Theatre), The Lion King (Lyceum Theatre) and Chicago (Adelphi Theatre).

The set and costumes for Porgy and Bess will be designed by Katrina Lindsay whose credits include Table and London Road (both National Theatre), Cabaret (West End and UK Tour), and Les Liaisons Dangereuses (Broadway) for which she won the 2008 Tony, Outer Critics Circle and Drama Desk Award winner for Best Costume Design. Choreography will be by Liam Steel whose credits include the musical staging and choreography for the film of Les Misérables and at Regent’s Park Open Air Theatre, co-directed and choreographed Into the Woods which was remounted at the Delacorte Theatre in New York’s Central Park in 2012.

Porgy and Bess is part of the 2014 season at Regents Park Open Air Theatre which also includes All My Son’s which ran from 15 May to 7 June, Hobson’s Choice starring Mark Benton from 12 June to 12 July, Twelfth Night (Re-imagined for everyone aged 6 and over) from 21 June to 12 July and To Kill a Mockingbird from 28 August to 13 September.