Şükrü Avşar, was the honored guest of the 6th issue of Filmstudio. 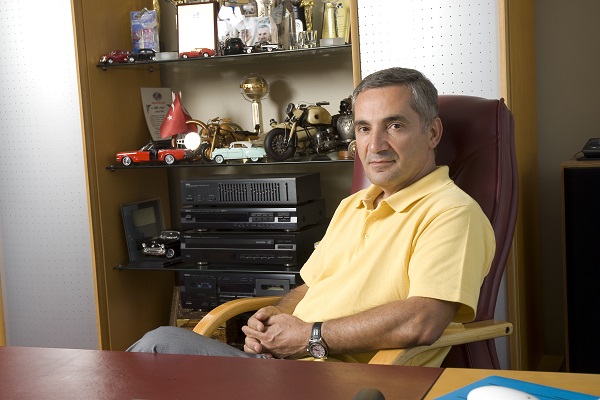 Stepping into cinema at a very young age and ultimately becoming a leading figure in the world of cinema and television, Şükrü Avşar, was the honored guest of the 6th issue of Filmstudio.  When we went to Avşar Film for the interview, we met a “big brother” who did not approach his employees with the identity of a boss but who told them about trueness, honesty and always doing better. A name that is one of the first to recall when the word “producer” is uttered in Turkey, in Avşar’s personality, we saw a leader who “did not become egoistical because of his accomplishments”.

I WORKED IN EVERY AREA OF THE INDUSTRY

FILMSTUDIO: Why did you choose to be a producer?

ŞÜKRÜ AVŞAR: I did not say I want to make shows, films, movies after a certain age. It was what I had been doing since childhood. Throughout the years, I worked in every area of the industry. Our main business is movie theater management; we have more than 100 movie theaters Turkey-wide. When we became big in movie theater management, we began importing films, again, at the same time, we had to make films; we began production business, we made films. When the television industry grew in Turkey, we tried to have a position in this area. We continue with cinema business, movie theater business, films, film management, film importation, and TV series production.

FILMSTUDIO: As a producer, who gave his years to the industry, how would you assess the TV series industry?

ŞÜKRÜ AVŞAR: People have been doing the same thing in television for 15 years. There are between 80 to 85 large and small scale series. In September, new series will begin, the audience will take whichever they choose, leave away the rest and there will be a landfill of TV series. A group of series will also try their luck in November, some of them will work. In March, there will be new attempts. Successful ones will hold on, and unsuccessful ones will go down. As a result, when you look at it, four or five big and small series will be successful in a year.

I LIKE NEITHER MY OWN WORK NOR OTHERS’ WORKS

FILMSTUDIO: Are there TV series that you like and watch?

ŞÜKRÜ AVŞAR: As a producer, I never like neither my own work nor others’ works too much and say “what a fine job I’ve done”. From time to time, there have been many series I appreciated. I am always trying to do better. If you say “I’ve done a great show, there is none better”, it is finished. I always believe that there is a better one.

FILMSTUDIO: People say “Şükrü Avşar does no one else does, he shoots 2 or 3 episodes of some shows and presents them to the channels”. Isn’t this is a serious risk?

ŞÜKRÜ AVŞAR: I don’t begin a work if I don’t trust it already. I do not have a mentality where I say “Let’s sell this first, get money from the channel and secure myself”. This mindset would be cheating the channel and yourself in the short-term. If it’s a work I believe in, I make my investment, then I say: “Come my friends, watch it, and buy if you like”. I usually work like this in all my businesses.

HOUSE OF NIGHTMARES WAS AN EXPERIMENT, MY PURPOSE WAS TO BECOME A PIONEER

Our House of Nightmares (Kâbuslar Evi) project was an experiment. I shot 13 episodes and delivered it for broadcasting. It was not so successful but I still evaluate that job. It has to be done like this. I made such a work to maybe become a ‘pioneer’ in this sector.

I have a project named ‘Köroğlu’. We are trying to finish all preparations. I will shoot 13 episodes and offer it to the channels after watching. Episodes will not be shot in a week. They will be shot in 15 days, indeed, some episodes may be shot in 20 days. Prospectively, we have to go like this; this is the only way we can get the quality. This is how the countries with the developed film industries do it.

I PREFER ACTORS WHO PAY ATTENTION TO ETHICAL VALUES

FILMSTUDIO: We know that you have successful and accurate decisions in your actor selections. What are the things you take into account while selecting actors?

ŞÜKRÜ AVŞAR: Actors themselves must also be analyzed in addition to the character analysis. I look at the previous works of the actor and try to analyze whether he/she suits that character. The most important point I take into account while selecting actors is that they regard ethical values.

THE ONE WHO SAYS “I KNOW THIS BUSINESS” IS LYING

We do so much business that some of them fail. I take lessons from those failures and ask “what can I do that is more successful?”. The one who says “I know this business” is lying. By time, we get to make less mistakes; this happens when you get experience within the years.

FILMSTUDIO: How do you explain Avşar Film’s success?

ŞÜKRÜ AVŞAR: Avşar Film comes from the 1970s. It has never been in tough situations. Greatest factor of our success is that we do not attempt what we cannot accomplish.

WE DON’T GET EGOTISTICAL BECAUSE OF OUR ACCOMPLISHMENTS

We don’t get egotistical because of our accomplishments. We have a certain level, we try to keep it up. We always try to raise the bar higher. We are not competing with, or have bad intentions against anybody. We do not get happy because of others’ failure. Partially, that’s where our success comes from.

FILMSTUDIO: Do you have an actor who you assess see as worthy of winning an Oscar?

ŞÜKRÜ AVŞAR: An actor’s winning an Oscar does not mean that such actor is very successful. The project and also the character must be great, so that the actor could get that achievement. I actually believe that Oscar-winning actors met the right character in the right project. I believe that our actors can achieve the same success if they had the opportunity.

WE ARE NOT AT THE LEVEL OF USA OR EUROPE YET

ŞÜKRÜ AVŞAR: Internationally, there are so many choices worldwide that, as Turkish cinema and television, we are a little behind. Unfortunately, we are not at the level of USA or Europe yet. However, we are much more advanced according to 10-20 years ago. The sector renovates and improves itself every year. I hope that we will see our actors in international films as soon as possible, and as Turkish cinema and television, we will perform great joint projects. When we succeed in Turkey, they will realize us as a sector and our actors internationally.

I SOLD A SHOW FOR 100 DOLLARS TO PROMOTE MY COUNTRY

THERE ARE NOT ENOUGH ACTORS TO LEAD 90 SHOWS

FILMSTUDIO: What do you think is the most important problem of the production sector?

ŞÜKRÜ AVŞAR: Production sector has so many problems. There are 90 TV series in Turkey but unfortunately, there are not enough actors to lead 90 shows. There are no 90 scenarists. Investment has to be made for the actors, scenarists and technical teams to provide to the business. I try to do, and I believe that I am doing my part in this. The job of acting must also become an industry in itself, actors have great responsibility on this issue.

TRT (Turkish Radio-Television Institution) cannot fulfill its sector-specific duty. Ministry of Culture needs to support this by opening schools to bring up people from scratch. We expect financial help from neither the government nor the Ministry. We want their support to improve the sector. If I will have to perform a certain duty, I am already willing to do it gladly.

LENGTH OF EPISODES ARE RELATED TO COMMERCIAL CONCERNS

FILMSTUDIO: Actors usually complain about the length of episodes, what is your opinion on this?

ŞÜKRÜ AVŞAR: Usually all of us, even the channels are also complaining. When we say “we want to give you 60 minutes, let’s agree on 60 minutes”, the budget we get do not recover our costs. If we get the same money for 60 minutes, the channels will be at loss. It is fully commercial that length of episodes reach 120 minutes; the channel has to close that day so that it would get back the money it would pay, give us, so that we can distribute it to our team.

FILMSTUDIO: How would you evaluate film-director Nuri Bilge Ceylan?

ŞÜKRÜ AVŞAR: I find Nuri Bilge Ceylan very successful in what he does. He represents us internationally with his films and makes us proud.

I like the perseverance, success, and work-ethics of Özcan Deniz very much. I appreciate Özcan very much. He is not lazy, he is continuously improving himself. His next film is always better than his previous film. His future is bright, I think that he will do great. Of course, it is not very good in terms of my business, he will make grand films for me, they will be costly but it is OK. No worries.

I am very giving towards people if I get the return for my love. If I sense that the person I face is a fake, not real, I do not make a fuss about it anyway, I pull myself back and gradually leave him out of my life.

FILMSTUDIO: Who are your favorite actors?

ŞÜKRÜ AVŞAR: I believe the success of actors with the characters they give life to. Tuncel (Kurtiz) was a doyen, he created his space even if there were no acts. May God rest his soul, he was a person that I loved dearly. He is a great loss of ours both as an actor and as a friend.