Happy New Year New Zealand the first to see in 2016 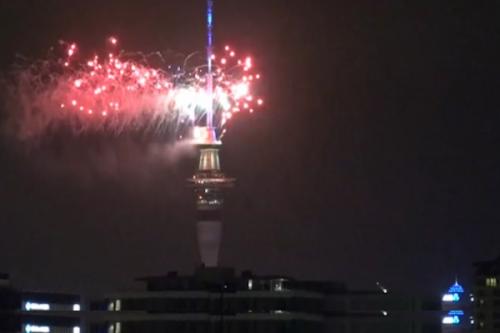 Auckland's sky was lit up last night with half a tonne of fireworks, blasted from the Sky Tower to mark the New Year.

The five-minute, 360-degree display was beamed around the world, as hordes of people gathered below to see the spectacle. Prior to the big countdown, a band entertained the crowd, performing Pharrell's hit song Happy, an apt song to match the mood of the inner city which was full of revellers, couples, families and flocks of kids on scooters all mixed up together. In parts of the SkyCity complex, crowds were almost too thick to walk through and vendors on the sidelines hawked glowing headwear and light sabers. There was plenty of traffic chaos and beeping horns as cars attempted to head into the city and enthusiastic punters spiller onto the road. Cheers started spontaneously erupting as midnight drew closer, culminating in a boisterous countdown from ten and the first bursts of fireworks. As the fireworks shot into the air, they were nearly out-dazzled by the lights of hundreds of phones being held in the air to photograph them. Friends and families hugged and it looked like a fair few people got the famous New Year's kiss.