Sergio Ramos pulled a goal back for Real, but Griezmann and Torres repeated the trick seconds into the second-half to restore Atletico's lead, 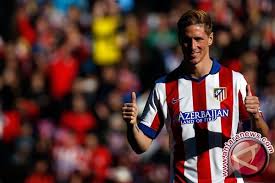 Sergio Ramos pulled a goal back for Real, but Griezmann and Torres repeated the trick seconds into the second-half to restore Atletico's lead.

Fernando Torres scored his first Atletico Madrid goals in eight years as the La Liga champions dumped holders Real Madrid out of the Copa del Rey 4-2 on aggregate after a 2-2 draw at the Santiago Bernabeu on Thursday. Already leading 2-0 from last week's first-leg, Torres stunned the hosts inside the first minute when turning home Antoine Griezmann's pass to hand Atletico a vital away goal. Fresh from winning the third Ballon d'Or of his career, Cristiano Ronaldo ensured the home side at least salvaged a draw on the night, but they have now failed to beat Atletico in five meetings this season. Atletico will almost certainly face Barcelona in the last eight, who travel to Elche later on Thursday holding a 5-0 first-leg.