The capital was treated to the fine world folk beats of Dogan Mehmet and his Boombox Karavan at the London Remixed Festival (LRF), which took place on Saturday night. 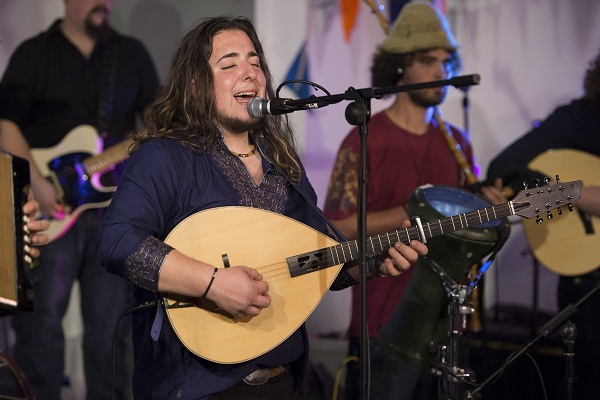 They performed songs from their new album Outlandish on the ‘Acoustic Boutique’ stage at Rich Mix – one of three venues in East London used for this indoor festival extravaganza. Following the performance, British-born Turkish Cypriot Dogan – one of the UK’s rising world music stars – told the media how he dreams of going to Turkey to further his understanding of Turkish music and to build cultural bridges with his native Britain.

LRF is both great winter entertainment for Londoners and also an important annual showcase of emerging British talent so they can be booked for the UK’s major music events in 2013. Dogan and his Boombox Karavan were one of 30 bands and DJs to appear at LRF, along with stilt walkers, roller skate dancers, face painters, dancing porta-loos and even a disco lift, which all helped create the eclectic feel of a British festival. Guests moved from venue to venue in Shoreditch enjoying the rich musical cocktail that included British folk, African, Latin and Balkan beats.

A uniquely talented musician, Dogan shone as he played the violin, darbuka, big drum and electric saz at LRF. Aided superbly by his six piece band, each masters in their own musical field, their fusion of English and Turkish folk music was both delightful to listen to and infectious for dancing. Dogan’s quick-witted banter with the crowd gave them an insight into each of the songs played. He taught them Turkish dance moves and words so they could sing along to Baris Manco’s ‘Domates Biber Patlican’, while shaking their shoulders and hips to ‘Uskudar’, Turkey’s oldest folk song, and ‘Leymosun Turkusu’, the anthem of Cypriot city Limassol.

After the performance Dogan said, “My band and I have never performed in Turkey. We’re aiming to go there in 2013 for concerts and to collaborate with master Turkish musicians.” He added, “We’ve got a great following in the UK and have been lucky to play major festivals such as Glastonbury. They invite artists from all over the world to perform, but rarely Turkey. Along with exchanging musical ideas, our trip can also help build cultural bridges. It’s hard to get on to the prestigious UK festival circuit so any way we can help more Turkish artists achieve that, we’d be delighted.”