DISNEY'S 'THE LION KING' ENTERS ITS 15th YEAR IN LONDON 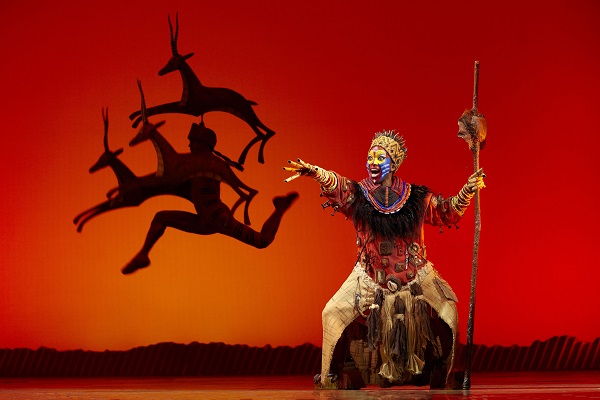 Disney’s award-winning musical THE LION KING has now entered its 15th year at London’s Lyceum Theatre. Since the UK premiere in London on Tuesday 19th October 1999, the show has welcomed over 11 million guests and remains the West End’s best-selling stage production. Tickets are currently on sale until 20 July 2014.

Winning over 70 theatre awards world-wide, this captivating stage production follows the adventures of the young lion cub Simba, as he struggles to accept the responsibilities of adulthood and his destined role of King.

Julie Taymor’s internationally celebrated stage adaptation of Disney’s beloved 1994 animated film was first seen on Broadway in 1997 and has now been seen by seen by over 70 million people across 6 continents. In addition to the record-breaking productions in London and New York, The Lion King can currently be seen in Hamburg, Madrid, Tokyo, Brazil and on tours of the UK, US and Japan.

A new production also began a tour of the United Kingdom in September 2012.

Julie Taymor, one of the world’s most innovative directors, brought a vast array of disciplines to The Lion King, including extensive experience staging epic theatre and opera productions, exploring classic myths through ritualised puppetry, mask, and movement. The Lion King was the first musical she directed in the commercial theatre, and Taymor made Broadway history by becoming the first woman to win the Tony Award® for ’Best Director of a Musical’.

Julie Taymor and Michael Curry created hundreds of masks and puppets. Scenic design is by leading British designer Richard Hudson and lighting is by Donald Holder. Costume design is by Julie Taymor, and choreography by Garth Fagan.

The book was adapted by Roger Allers, who co-directed the animated feature, and Irene Mecchi, who co-wrote the screenplay of The Lion King.

The original score from the animated film was expanded for the stage and now features 15 musical numbers.

As well as writing completely new songs, South African composer Lebo M created an evocative blend of African rhythms and chorales, with additional material by Julie Taymor and Mark Mancina. Elton John and Tim Rice have added three new numbers to the five that they wrote for the award-winning score of the animated film. The resulting sound of The Lion King is a fusion of Western popular music and the distinctive sounds and rhythms of Africa, including the Academy Award®-winning Can You Feel The Love Tonight and the haunting Shadowland.

The Lion King plays Tuesday to Saturday at 7.30pm with matinee performances on Wednesday, Saturday and Sunday at 2.30pm.

There is no performance on a Monday evening.

The Walt Disney Company, together with its subsidiaries and affiliates, is a leading diversified international family entertainment and media enterprise. Disney is a Dow 30 company and had annual revenues of around $42.3 billion in its last fiscal year (FY12).

The Walt Disney Company has operated in the UK and Ireland for 80 years and currently employs over 2,800 people, and is dedicated to creating innovative, entertainment experiences for children and families. Disney’s magic is experienced in numerous ways including on a range of Disney-branded channels, in Disney Stores, on stage with “The Lion King” and in cinemas and retail outlets across the UK and Ireland. In 2008, Disney announced its partnership with Great Ormond Street Hospital Children’s Charity focused on raising £10 million towards the hospital’s redevelopment appeal. The Disney Appeal works across all of the Disney businesses to raise funds and provide unique and memorable experiences for patients and their families.

In its 16th year, ‘The Lion King’ remains ascendant; it is the highest-grossing Broadway show in New York history and one of the most popular stage musicals in the world.  Since its Broadway premiere on November 13, 1997, 21 global productions have been seen by more than 70 million people and, cumulatively, run a staggering 96 years.  Produced by Disney Theatrical Productions (under the direction of Thomas Schumacher), ‘The Lion King’ is only the second show in history to generate five productions worldwide running 10 or more years.  Translated into seven different languages (Japanese, German, Korean, French, Dutch, Spanish and Portuguese), productions of ‘The Lion King’ can currently be seen on Broadway and on tour across North America, in Tokyo and on tour in Japan, in London’s West End and on tour throughout the UK, and in Hamburg, Madrid and Sao Paolo.  To date, ‘The Lion King’ has played 98 cities in 18 countries on every continent except Antarctica.

The award-winning musical will celebrate a new milestone in December 2013 when it returns to Australia, making it the tenth concurrent worldwide production of ‘The Lion King’, the highest number of productions running at any one time in the show’s history.

The show’s director, costume designer and mask co-designer Julie Taymor continues to play an integral part in the show’s ongoing success.  The first woman to win a Tony® Award for Direction of a Musical, Taymor has in recent years supervised new productions of the show in Las Vegas, Madrid and the UK tour and casting the Brazilian production in Sao Paolo.

The Broadway score features Elton John and Tim Rice’s music from The Lion King animated film along with three new songs by John and Rice; additional musical material by South African Lebo M, Mark Mancina, Jay Rifkin, Julie Taymor and Hans Zimmer; and music from "Rhythm of the Pride Lands," an album inspired by the original music in the film, written by Lebo M, Mark Mancina and Hans Zimmer.  The resulting sound of ‘The Lion King’ is a fusion of Western popular music and the distinctive sounds and rhythms of Africa, ranging from the Academy Award®-winning song “Can You Feel the Love Tonight” to the haunting ballad “Shadowland.”