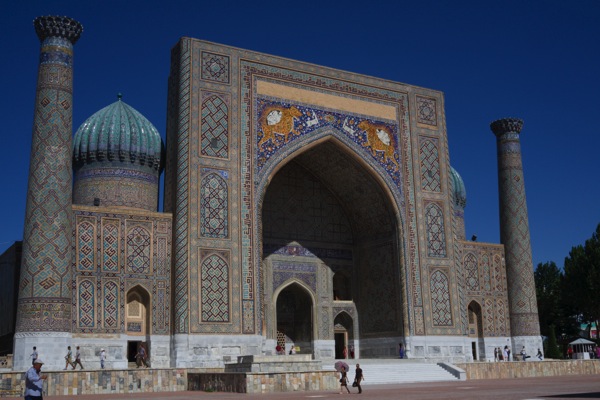 Uzbekistan officially the Republic of Uzbekistan, is one of only two doubly landlocked countries in the world Located in Central Asia, it is a unitary, constitutional, presidential republic, comprising twelve provinces, one autonomous republic and a capital city. Once part of the Turkic Khaganate and later Timurid Empires, the region that today includes the Republic of Uzbekistan was conquered in the early 16th century by Eastern Turkic-speaking nomads. The area was gradually incorporated into the Russian Empire during the 19th century, and in 1924 what is now Uzbekistan became a bordered constituent republic of the Soviet Union, known as the Uzbek Soviet Socialist Republic (Uzbek SSR). Following the breakup of the Soviet Union, it declared independence as the Republic of Uzbekistan on 31 August 1991 (officially celebrated the following day).

The Ulugh Beg Observatory is an observatory in Samarkand, Uzbekistan. Built in the 1420s by the Timurid astronomer Ulugh Beg, it is considered by scholars to have been one of the finest observatories in the Islamic world. Some of the famous Islamic astronomers who worked at the observatory include Al-Kashi, Ali Qushji, and Ulugh Beg himself. The observatory was destroyed in 1449 and rediscovered in 1908.Bukhārī Islamic scholar who was born in Bukhara (the capital of the Bukhara Region (viloyat) of Uzbekistan). He authored the hadith collection known as Sahih al-Bukhari, regarded by Sunni Muslims as one of the most authentic (sahih) hadith collections. He also wrote other books such as Al-Adab al-Mufrad.Muhammad ibn Isma`il al-Bukhari al-Ju`fi was born after the Jumu'ah prayer on Friday, 19 July 810 (13 Shawwal 194 AH) in the city of Bukhara in Transoxiana (in present-day Uzbekistan).His father, Ismail ibn Ibrahim, a scholar of hadith, was a student and associate of Malik ibn Anas. Some Iraqi scholars related hadith narrations from him.Al-Mughirah's father, Bardizbah, is the earliest known ancestor of Bukhari according to most scholars and historians. He was a Magi (Zoroastrian and died as such. As-Subki is the only scholar to name Bardizbah's father, who he says was named Bazzabah . Little is known of either Bardizbah or Bazzabah, except that they were Persian and followed the religion of their people.Historians have also not come across any information on Bukhari's grandfather, Ibrahim ibn al-Mughirah.

The Registan was the heart of the ancient city of Samarkand of the Timurid dynasty, now in Uzbekistan. The name Rēgistan means "Sandy place" or "desert" in Persian.The Registan was a public square, where people gathered to hear royal proclamations, heralded by blasts on enormous copper pipes called dzharchis - and a place of public executions. It is framed by three madrasahs (Islamic schools) of distinctive Islamic architecture.The three madrasahs of the Registan are: the Ulugh Beg Madrasah (1417–1420), the Tilya-Kori Madrasah (1646–1660) and the Sher-Dor Madrasah (1619–1636). Madrasah is an Arabic term meaning school.

The Ulugh Beg Madrasah, built by Ulugh Beg during the Timurid Empire era of Timur—Tamerlane, has an imposing iwan with a lancet-arch pishtaq or portal facing the square. The corners are flanked by high minarets. The mosaic panel over the iwan's entrance arch is decorated by geometrical stylized ornaments. The square courtyard includes a mosque and lecture rooms, and is fringed by the dormitory cells in which students lived. There are deep galleries along the axes. Originally the Ulugh Beg Madrasah was a two-storied building with four domed darskhonas (lecture rooms) at the corners.

In the 17th century the ruler of Samarkand, Yalangtush Bakhodur, ordered the construction of the Sher-Dor madrasahs. The tiger mosaics on the face of each madrassa are interesting, in that they flout the ban in Islam of the depiction of living beings on religious buildings.

Ten years later the Tilya-Kori  Madrasah was built. It was not only a residential college for students, but also played the role of grand masjid (mosque). It has a two-storied main facade and a vast courtyard fringed by dormitory cells, with four galleries along the axes. The mosque building  is situated in the western section of the courtyard. The main hall of the mosque is abundantly gilded.

Uzbekistan is officially a democratic, secular, unitary, constitutional republic with a diverse cultural heritage. The country's official language is Uzbek, a Turkic language written in the Latin alphabet and spoken natively by approximately 85% of the population; however, Russian remains in widespread use. Uzbeks constitute 81% of the population, followed by Russians (5.4%), Tajiks (4.0%), Kazakhs (3.0%), and others (6.5%). A majority of Uzbeks are non-denominational Muslims. Uzbekistan is a member of the Commonwealth of Independent States (CIS), Organization for Security and Co-operation in Europe (OSCE), UN, and the SCO. While officially a democratic republic, non-governmental human rights organizations define Uzbekistan as "an authoritarian state with limited civil rights".

Uzbekistan's economy relies mainly on commodity production, including cotton, gold, uranium, and natural gas. Despite the declared objective of transition to a market economy, its government continues to maintain economic controls which imports in favour of domestic "import substitution".

The people, history and culture of Uzbekistan - Traveling the Silk Road | DW Documentary