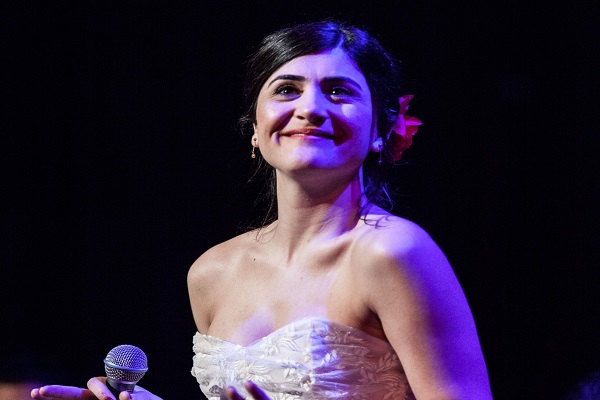 Following the success of her album Mortissa, which has won critical acclaim across the world, the singer, who was born in Istanbul in Kurdish Alevi family but lives in London, is in demand across Europe with concerts from Norway to Morocco. On 7 June she will appear in concert at the prestigious Kings Place in a double-bill with world famous Iranian kamancheh (kemençe) player Kayhan Kalhor. Kalhor recently achieved international praise for his duo album with Erdal Erzincan, which was released on the international ECM jazz label. In the concert he is playing music created during the opposition protests in Tehran in 2009.

Also featuring in the 3-day world music festival from 5-7 June are artists from Venezuela, Ivory Coast, Romania and UK. On 5 June an African theme is strong with the charismatic Family Atlantica and the stunning Dobet Gnahoré in an evening that will be high-energy from start to finish. On 6 June fans of Balkan music will enjoy the old-time vocals of Oana Catalina Chiţu from Romania and the electrifying violin of Anna Phoebe. The festival finishes on 7 June with Turkish, Greek and Persian music. For those interested in the instrument, at 6.15pm Kalhor will give a talk and demonstration on the specially-created shah keman he'll be playing in this performance. A chance to get close to a great master.

Çiğdem Aslan’s album Mortissa won a prize in the German Record Critics’ Award 2014 and was selected as Best Album of 2013 by Songlines Magazine, the co-curator of the festival. In Turkey she recently appeared live on NTV’s Gece Gunduz programme and was featured across national newspapers from Radikal to Sabah. Recently Çiğdem has been the cover story on Folker magazine in Germany.  Her programme of Greek and Turkish rebetiko music is a strong point of contact between two communities with shared roots and brings the music culture of the meyhane or café aman to new audiences across Europe.

London’s Turkish and Kurdish community are rightly proud of Çiğdem Aslan’s success as her career takes her around the world. Tickets are available from £14.50-£24.50. Advance booking is recommended as the concert is expected to sell out in advance.  Tickets can be bought in person from Kings Place 90 York Way London N1 9AG by phone 020 7520 1440 or online www.kingsplace.co.uk