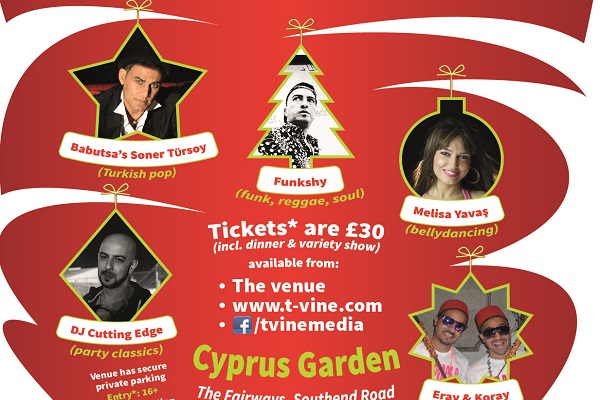 The ‘variety show’ style event includes a 3-course meal, live music, comedy, dancing, DJs and more. The party is taking place at Turkish London’s most popular venue Cyprus Garden and Londoners are urged to get their tickets fast as over half have already been sold.

Doors open at 7pm, a nd the show starts at 7.30 and runs till midnight. The line-up is packed full of quality entertainment: Babutsa’s Soner Tϋrsoy sings Turkish pop hits, while Tansay Omar’s Funkshy plays a cool blend of funk, reggae and soul music. The gorgeous Melisa Yavaş will be getting everyone to shake their hips with her bellydancing set, while DJs Cutting Edge and Elliot Patterson will ensure people stay on the dance floor with British Turkish party classics. The evening is hosted by Kibrisli Boys and this month’s T-VINE front cover Eray & Koray.

Entry to the T-VINE Christmas party is open to anyone aged 16 or over and tickets are priced just £30. It includes entry to the variety show and dinner (starter, mains and dessert) – drinks are not included. The meal comprises of:

T-VINE founder and editor Ipek Ozerim said: “The T-VINE Christmas Party is the perfect end to a long hard year. It’s our way of saying thank you to the T-VINE team for all their hard work and to celebrate with the wider public the very essence of our magazine. We have brought together the best of both traditions, fusing Turkish sparkle with British festive treats. And we’re creating an important new platform for English-speaking Turks to perform. It’s going to be a great night out!”

Tickets can be bought the online ticket shop on T-VINE’s website or Facebook pages, or from Cyprus Garden, or from the T-VINE street team in North, East and South London.

The event is produced by RPJ Events & Prickly Pear on behalf of T-VINE. For further information about the event please email info@t-vine.com.

T-VINE was launched in April of this year as a free online and print publication for British Turks. As the first and only English language consumer publication, it fills an important gap for the 500,000-strong community. Aimed at 25-55 year olds, T-VINE covers people, places, politics, lifestyle, culture, consumer goods and wellbeing. The editorial team includes Asli Alp, a former supplements editor for Sabah and Radikal newspapers, and John Oakes, a former Fleet Street journalist, as well as a host of experienced and colourful contributors.

The print version is an A4-sized, a 40-page full-colour magazine that is published bi-monthly. 5,000 copies are distributed to over 80 Turkish supermarkets, schools, community centres and other key outlets, with the remainder distributed to cafes, restaurants, barbershops, hairdressers, beauticians, shops, dentists, doctor’s surgeries, and professional offices in London. Being in English & of a high quality, its reach is beyond just Turks with many more people picking up and reading the magazine.