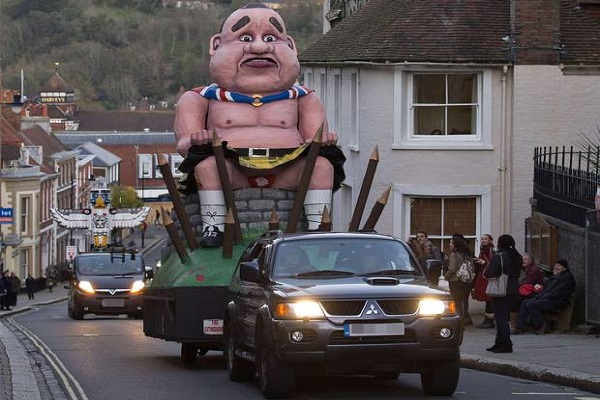 Pouring salt on Alex Salmond’s wounds fresh from losing the Scottish Referendum, a society taking part in the UK’s biggest bonfire night celebration had planned to burn an effigy of the former SNP leader.

Waterloo Bonfire Society, one of the seven organisations which take part in Lewes Bonfire Night, built a model of a giant Humpty Dumpty-like Salmond holding a sign reading “45%” – referring to the percentage of Scots who voted for independence. A separate model of Salmond shows him topless and draped in a Union Jack flag, flashing his pants from under his kilt.

But Sussex Police later said that the effigy would not be burned as they investigated a complaint.

As preparations for tonight’s celebration got underway, East Sussex County Council (ESCC) tweeted an image of the model on a Lewes street.

But following a Twitter backlash, the authority stressed that the model had “no connection to ESCC” and has since deleted the photo. However, screen grabs taken earlier of the image remain on the social media website.