Sotheby’s S|2 gallery in London will host the first, unauthorized, retrospective exhibition of works by the internationally renowned artist Banksy. 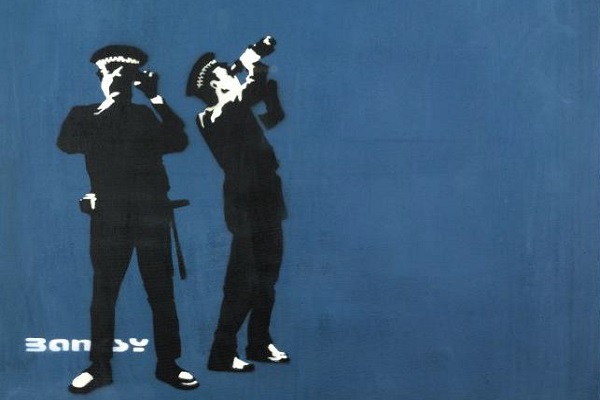 From 11 June to 25 July 2014, Sotheby’s S|2 gallery in London will host the first, unauthorized, retrospective exhibition of works by the internationally renowned artist Banksy. Curated by Steve Lazarides – Bansky’s agent and wingman through the critical early years – the show will bring together over 70 paintings, sculptures and prints Lazarides considers seminal to Bansky’s rise. The first major exhibition of works by Banksy on the secondary market, the S|2 exhibition also ranks among the biggest shows of Bansky’s work ever staged.

With prices ranging from £4,000 to over £500,000, the selling exhibition includes everything from signature early works such as Avon and Somerset Constabulary – an image famous from the 2000 Bristol Severnshed show – right up to the politically charged Guantanamo Bay ‘Crude Oil’ painting from Banksy’s Barely Legal show in Los Angeles in 2006.

Many of the works in the exhibition have never been seen before, having been purchased directly from Lazarides and Banksy at the moment they were produced. Others have been seen, but only very briefly: Banksus Militus Vandalus, for instance, was illegally installed by Banksy in the Natural History Museum in 2004, where it remained for two hours before being spotted by officials and removed. It has only been seen once in public since then.