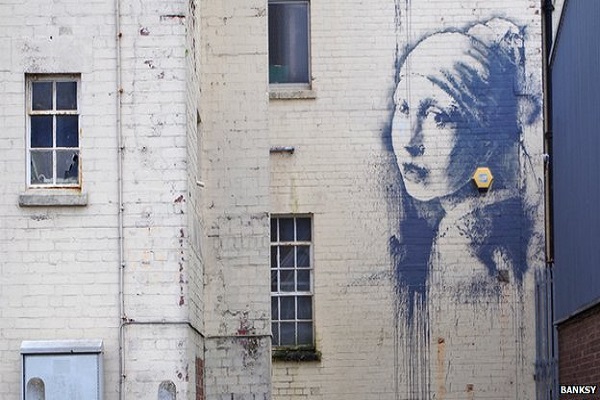 A new mural by street artist Banksy in Bristol has been vandalised less than 24 hours after the work appeared.

Girl with a Pierced Eardrum incorporates an alarm box as the model's earring.

On Tuesday, the work was found with dark paint thrown across the bottom of the woman's face.Banksy's last work in the city was Mobile Lovers, which appeared in a doorway in Clement Street in April.

A row broke out over who owned it, with Bristol City Council arguing the work was on its land.

However, Banksy wrote to Broad Plain Boys' Club saying it was theirs and the club sold it to a private collector for £403,000.

But the anonymous graffiti artist's new mural is not the first to have been vandalised in his home town.

In 2009, red paint was thrown over Mild Mild West on Stokes Croft prompting calls for the piece - one of Banksy's most famous - to be protected with a clear plastic covering.