A 13-year-old eagle huntress in Mongolia 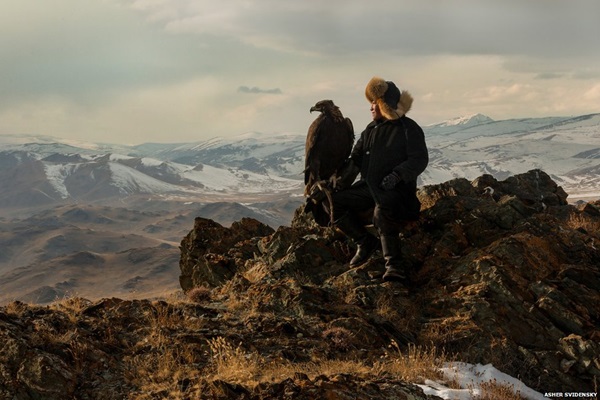 Most children, Asher Svidensky says, are a little intimidated by golden eagles. Kazakh boys in western Mongolia start learning how to use the huge birds to hunt for foxes and hares at the age of 13, when the eagles sit heavily on their undeveloped arms. Svidensky, a photographer and travel writer, shot five boys learning the skill - and he also photographed Ashol-Pan. "To see her with the eagle was amazing," he recalls. "She was a lot more comfortable with it, a lot more powerful with it and a lot more at ease with it."The Kazakhs of the Altai mountain range in western Mongolia are the only people that hunt with golden eagles, and today there are around 400 practising falconers. Ashol-Pan, the daughter of a particularly celebrated hunter, may well be the country's only apprentice huntress. They hunt in winter, when the temperatures can drop to -40C (-40F). A hunt begins with days of trekking on horseback through snow to a mountain or ridge giving an excellent view of prey for miles around. Hunters generally work in teams. After a fox is spotted, riders charge towards it to flush it into the open, and an eagle is released. If the eagle fails to make a kill, another is released. The skill of hunting with eagles, Svidensky says, lies in harnessing an unpredictable force of nature. "You don't really control the eagle. You can try and make her hunt an animal - and then it's a matter of nature. What will the eagle do? Will she make it? How will you get her back afterwards?" The eagles are not bred in captivity, but taken from nests at a young age. Female eaglets are chosen since they grow to a larger size - a large adult might be as heavy as seven kilos, with a wingspan of over 230cm. After years of service, on a spring morning, a hunter releases his mature eagle a final time, leaving a butchered sheep on the mountain as a farewell present. "That's how the Kazakh eagle hunters make sure that the eagles go back to nature and have their own strong newborns, for the sake of future generations," Svidensky says. He describes Ashol-Pan as a smiling, sweet and shy girl. His photographs of her engaging in what has been a male activity for around 2,000 years say something about Mongolia in the 21st . "The generation that will decide what will happen with every tradition that Mongolia contains is this generation," says Svidensky, who showed Ashol-Pan's family the photographs on his laptop. "Everything there is going to change and is going to be redefined - and the possibilities are amazing."