The ensemble includes musicians and students from the UK, Iran, Central Asia, India, China, Japan, and the United States 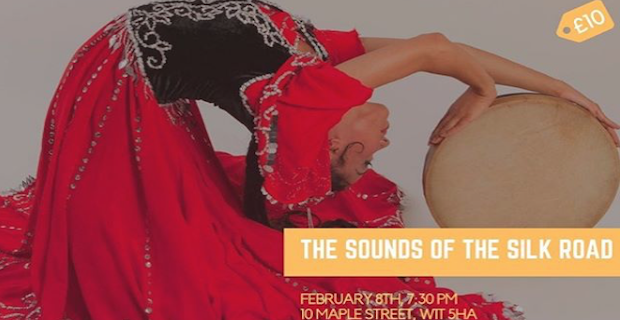 The SOAS Silk Road Collective is a London-based musical ensemble and initiative which encourages collaboration among musicians from different cultures along the ancient silk routes, and celebrates their shared cultural heritage. Currently, the ensemble includes musicians and students from the UK, Iran, Central Asia, India, China, Japan, and the United States, who perform a wide range of pieces from courtly and folk repertoires from Turkish, Iranian, Afghan, Uzbek, Tajik, Uyghur, and Indian musical traditions on a variety of instruments.

Dr Rachel Harris (dutar)
Rachel teaches ethnomusicology at the School of Oriental and African Studies in London. Her research focuses on music in Central Asia‚ and she has spent long periods in the Uyghur region where she learned the dutarwith master musicians Musajan Rosi, Yasin Muhpul and Abdulla Majnun. She has worked extensively with the Aga Khan Music Initiative to promote Central Asian music in the West, and currently leads a British Academy funded project to revitalise Uyghur cultural heritage in Kazakhstan. She has performed widely with the London Uyghur Ensemble since 2004, and has played a leading role in developing musical collaborations across Central Asian borders, founding the SOAS Silk Road Collective in 2018.

Rahima Mahmut (vocal)
Rahima is the vocalist and co-founder of the London Uyghur Ensemble – a London based group performing traditional and popular music of the Central Asian Uyghurs.
Born in the city of Ghuja, East Turkestan (Xinjiang, China), Rahima was brought up in a large religious and musical family. She learned to sing from her mother‚ absorbing the distinctive local style‚ and came to be known as the ‘nightingale from heaven’ as a young girl. Rahima, through her singing tells the story of her people which is little known in the west. Since the forming of the Ensemble in 2004, she has performed at many music venues and festivals within the UK and worldwide, becoming well-known in Central Asian musical circles.

Tara Catherine Pandeya (dance)
Tara is a performing artist, choreographer and dance scholar. She has conducted dance residencies in Urumqi at Xinjiang Art Institute in Uyghur classical dance, in Uzbekistan as well a year (2015-2016) dancing as the first and only westerner to be invited into a Tajik State Ensemble ‘Lola’ in Dushanbe, Tajikistan. She was one of the founding members of the ‘Tajik Dance Initiative’ (TDI), an NGO created to promote the preservation and development of Tajik performing arts. Through TDI, Tara assisted in Dance Ethnology field research in the Pamir Mountains under Professor Friend. From 2010 to 2015, Tara completed 1,500 shows on a five-continent and 170-city tour with Cirque du Soleil, working as a principle dancer, dance captain and social outreach liaison officer. Tara’s solo work has been reviewed in the New York Times by dance critic Alastair Macaulay, who praised Tara’s performance as ‘nothing less than electrifying… [the] piece “The Dance of the Grapes” was the program’s greatest revelation.’ In February 2017, Tara was supported by the Rockefeller Foundation to conduct cross-cultural dance research in Pakistan where she created a project entitled ‘It’s a Good Day to Disobey’ centred around women dancing in the public spaces.

Iskandar Ding (daf, Kashgar rubab)
Iskandar’s interest in the correlation between music, poetry, and language in the Persianate world led him to learn the Kashgar rubab with London-based Uzbek rubab and dutar master Sardor Mirzakhojaev. A member of the London Uyghur Ensemble since 2014, he has performed with the group at various venues across the UK. He has also performed as a soloist or accompanying instrumentalist at a number of Central Asian and Afghan events. He is currently pursuing an MA in Iranian Studies at SOAS University of London.

Mohanish Jaju (tabla)
Mohanish is a versatile tabla player. A disciple of Pandit Kumar Bose of Benaras Gharana, he has completed his master's degree in North Indian Classical Music from Bharati University, Pune, India, and is currently pursuing MMus Ethnomusicology at SOAS University of London.
He has accompanied stalwarts such as Padma Vibhushan Pandit Birju Maharaj (kathak), legendary vocalist Pandit Somnath Mardur and a number of the contemporary masters.

Niknaz Mirghalami (tanbur, setar)
Niknaz first encountered music when she started playing piano at the age of 7. In addition to her 12-year experience as a professional dancer, she has dedicated her life to the art of tanbur and setar, having performed as a soloist as well as a member of a few musical ensembles. With a BA in Architecture and an MA in Philosophy of Art, she is currently pursuing MMus of Music Performance at SOAS University of London.

Shotaro Sasaki (oud, ghijek)
Shotaro holds a bachelor's degree from Tokyo University of Fine Arts. As an ethnomusicologist, he has conducted fieldwork in various regions of the world and studied a wide range of stringed instruments.

Dr Erdem Özdemir (bağlama, lavta, vocal)
Dr Özdemir graduated from the National Conservatoire of Turkish Music of Istanbul Technical University in 2003. He received his master’s degree with the thesis ‘Abdal Music’ in 2008 and his PhD with the thesis ‘Aşık Music’ in 2013. His first solo album was released in 2010.
After working as a researcher at Uppsala University in Sweden in 2011, Dr Özdemir finished his post-doctoral research on Uyghur music under the supervision of Dr Rachel Harris at SOAS University London. During his artistic and academic career, he has given many academic presentations and performed at numerous concerts - in Turkey as well as many countries in the world – as a bağlama instrumentalist and a vocalist. At present, he is teaching bağlama, ‘History of Traditional Turkish Music’, ‘Traditional Music in Central Asian Turkic Communities’, ‘Music in the Socio-Cultural Structures of Turkey’, and ‘Music in Ottoman Geography’ in the National Conservatoire of Uludağ University. Apart from the bağlama, he also plays and teaches the lavta and dutar.