On 29 October 1923, the status of the nation as a republic was declared and its official name was proclaimed to be Türkiye Cumhuriyeti. 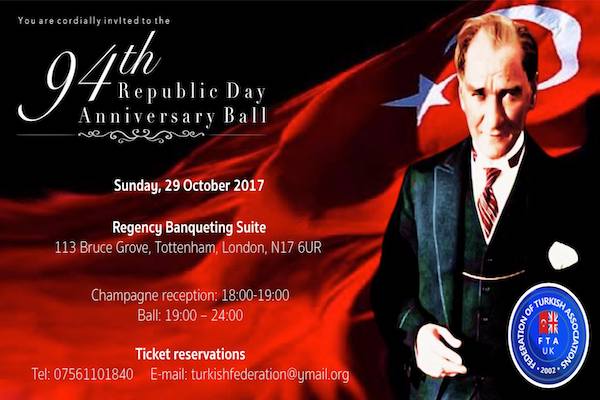 The Republic Day of Turkey (Turkish: Cumhuriyet Bayramı) is one of the public holidays in Turkey and Northern Cyprus, commemorating the proclamation of the Republic of Turkey in 1923. The holiday commemorates the events of 29 October 1923, when Mustafa Kemal declared that Turkey was henceforth a republic. Turkey had de facto been a republic since 23 April 1920, the date of the establishment of the Grand National Assembly of Turkey, but the official confirmation of this fact came only three-and-a-half years later. On 29 October 1923, the status of the nation as a republic was declared and its official name was proclaimed to be Türkiye Cumhuriyeti ("the Republic of Turkey"). After that, a vote was held in the Grand National Assembly, and Atatürk was elected as the first President of the Republic of Turkey.

Tuncay Ozkan and Umit Zileli are the honur guest.

Including: a 3 course meal, unlimited soft drinks and 2 bottles of wine for each table, live music and entertainment

Tickets are £40 and can be reserved through either online bank transfer or paying by cheque. Cheques can be written to FTA UK and can be posted to our office at 228A Kingsland Road, London, E2 8AX, which is also open from 12pm to 6pm on Saturdays for direct ticket sales.