Performance enjoyed by more than 10,000 Israelis, with ticket prices starting from $300 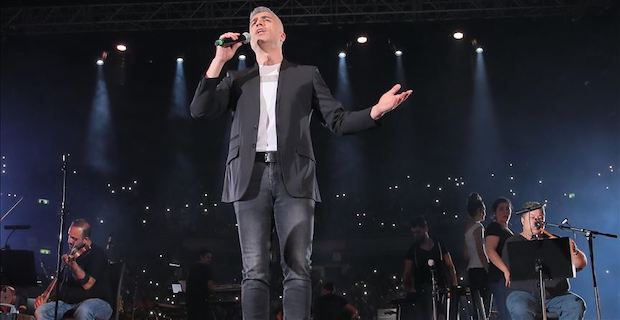 The concert was held at Menora Mictachim Arena in capital Tel Aviv and tickets, whose prices started from $300, were sold out days before.

According to Israeli officials, the performance by the Turkish singer, who has recently received a stunningpopularity over his starring role in soap opera Istanbullu Gelin (The Bride of Istanbul), was enjoyed by nearly 11,000 people.

Istanbullu Gelin narrates a love story. Faruk, played by Deniz, is a rich businessman who lives in Bursa, a city near Istanbul. He falls in love with Sureyya, played by Enver, who has grown up without a parent. They get married and Faruk brings her to Bursa.

Her arrival angers a dominant mother-in-law who opposes the wedlock because Surreya is a violinist and an Istanbul resident.

The concert had been announced months ago but pro-Palestinian Boycott, Divestment, and Sanctions (BDS) movement raised concern and called on the stars of the series to reject the performance.

"We call on you to be the voice of Palestinians and oppositional Jews, to avoid assisting Israel in its efforts to whitewash itself, to refuse permission for the broadcast of 'The Bride of Istanbul' in Israel and to reject your invitation to appear in Tel Aviv," BDS movement said in an open letter.

Turkish TV series have recently drawn great interest in Israel. Among them, Istanbullu Gelin is the most popular, Israeli media reported late March.

"The Bride of Istanbul is much more than a TV soap opera. Many Israelis have already traveled to the show’s set in the desperate hope of obtaining a selfie with the actors of the series," Ariana Melamed wrote in her article titled "The Turks Are Back, and They've Got All of Israel Addicted" for Israeli daily Haaretz.

Keywords:
Ozcan DenizConcert In IsraelFamous Turkish Actor
Your comment has been forwarded to the administrator for approval.×
Warning! Will constitute a criminal offense, illegal, threatening, offensive, insulting and swearing, derogatory, defamatory, vulgar, pornographic, indecent, personality rights, damaging or similar nature in the nature of all kinds of financial content, legal, criminal and administrative responsibility for the content of the sender member / members are belong.
Related News