THE 1915 DOCUMENTARY A FILM BASED ON ARMENIAN SOURCES

This film is essential viewing for anyone interested in the truth about the events of 1915. 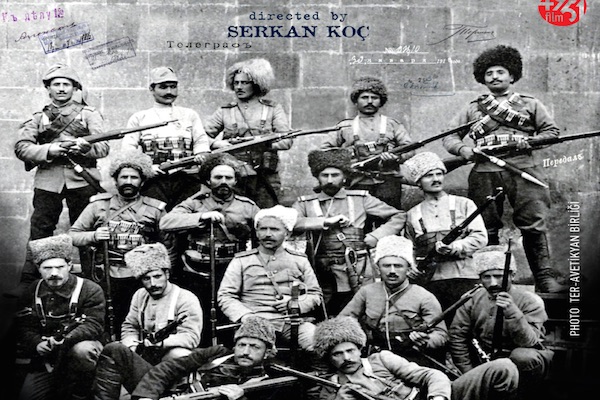 It is based solely on documentary evidence, including much uncovered in the Russian archives. It includes film clips from Eastern Anatolia in 1982 that have never been shown publicly. These clips recently came to the possession of the director who has included them in this latest work. This has enabled him to bring to life the memories of individuals who lived through the tragic events of 1915.The documentary clearly demonstrates that the claims of genocide from Armenian activists lack credibility, especially in the light of so much conflicting evidence. Important new Armenian sources, obtained from Russian archives, reveal what actually happened during this tragic period, and these are significant and important aspects of this work. Its aim is to put an end to any confusion in this subject.

“The 1915 Documentary” opens a startlingly new window into events at the time drawing on Armenian sources available in the Russian Archives, as the Armenian archives are still not open to public. This new knowledge is based primarily on the work of Mehmet Perinçek who has researched Russian State archives since 1988. The documentary also contains interviews with many prominent historians who have done extensive research into Ottoman – Armenian history. Professor Dr Justin McCarthy, Professor Dr Heath Lowry and Professor Norman Stone are some of these academics. There are also several interviews with members of the Turkish Armenian clergy.

This film is essential viewing for anyone interested in the truth about the events of 1915.

Serhan Koc, Film Director was born in İstanbul in 1976. He began his journalism career in Ulusal Kanal TV in 2000 and later worked on various programmes as a director. Koç’s first documentary work, completed in 2006, was called “Atatürk unknown” which had 11 parts. Koç made several films, documenting the tragic events of Gezi Park in June 2013. He continues to make documentary films, involving historical events and current affairs.

Some of his documentary films are:

Associate Prof. Dr. Orhan Çekiç was born in 1944 in İskenderun, Turkey. He graduated from the Faculty of Political Sciences, University of Ankara and received his Master and Doctorate degrees from Marmara University, İstanbul. He has been the Department Head of the History of Turkish Revolution, and the Founder President of The Research Center of Atatürk at University of Maltepe since 2000.

Dr. Orhan Çekiç won an award on the subject of International Terrorism and Armenian Terrorism, organised by Sabah Group of newspapers in 1983. He is a well known scholar for his essays, TV programmes and books on several historical facts and disputes, including the Armenian issue. He is married and has two children.

Among his books are:

From Sivas to Ankara; The History of the Turkish Republic; From Empire to Republic; Or Yayınları, İstanbul, 2010.

This ground-breaking film will have its first screening on 20th April 2015 in London. Unlike the accusatorial films and publications by Armenian activists, it is not a propaganda film

The Federation of Turkish Associations UK

to the first screening of a ground breaking documentary

on Monday, 20th April 2015 at 7pm at the Institute of Contemporary Arts (ICA)

in The Mall, London SW1Y 5AH

A FILM BASED ON ARMENIAN SOURCES

Serkan Koç who will be present at the event.

There will be a Questions and Answers session.

Attendance is free but with registration only.

tube stations are at Trafalgar Square and Charing Cross (which has also a main line station).

Following the screening, Dr Orhan Çekiç, Associate Professor at Maltepe University will be talking about his new book: “Stillborn Child of Imperialism: Armenia”