Turkish coffee has been consumed in former Ottoman countries for centuries. 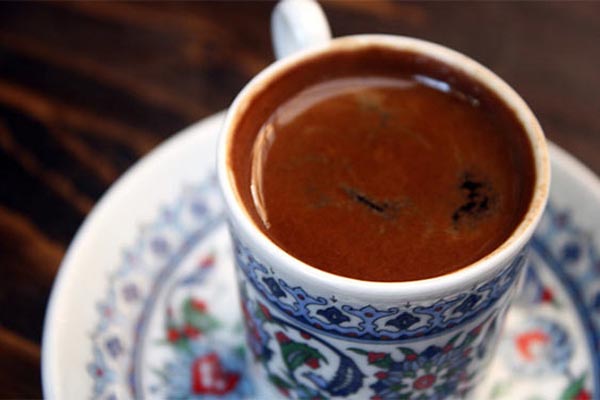 Widely embraced by every level of social strata, coffee had a significant place in everyday life and social interactions. Today, coffee is the most consumed beverage in the world and has different names in accordance with different cooking styles, like Turkish coffee. No doubt, coffee is the most consumed drink around the world. Although it has almost the same ingredients where ever it is found, there are many different ways of making it. According to Ottoman tradition, Turkish coffee is cooked in a pot on a barbecue pit, a method that has distinguished Turkish coffee since the 16th century.

First presented in a store in Istanbul in the 16th century, Turkish coffee spread across the city, then across the entire empire. Coffee houses had the role of a place where senior bureaucrats gathered, exchanged views and read books and newspapers.

Turkish coffee constitutes an indispensible part of daily Greek routines. Having been served as Turkish coffee, the traditional drink is still made with traditional methods and is presented with white insulates. Figures suggest that Turkish coffee is the most consumed drink in Greece. The country was introduced to Turkish coffee after the Ottoman conquest. Just as most part of western Europe and the Balkans, Turkish coffee is made in the same way. However, the friction in diplomatic relations between Turkey and Greece has affected the naming of Turkish coffee in Greece since 1955. Now, Greeks generally call it 'Greek coffee'.

In today's Greece, it is still very common to encounter Turkish coffee still being made in traditional ways. It is generally assumed that preparing Turkish coffee on the sand is a Middle-Eastern way, however, in Greece this method is also still alive.

Another country where the smell of Turkish Coffee wafts through the streets is Bosnia-Herzegovina. Many people in Bosnia see Turkish coffee as a national drink. Whether you ask for Turkish coffee or Bosniak coffee, they are both the same. What distinguishes Bosniaks is their rituals including eating Turkish Delight served with coffee.

Enjoyed in homes and coffee houses in Bosnia, Turkish coffee is considered to be a part of living Ottoman culture and has a special place in social life. Called 'Turska kafa' or 'Turke' in different parts of the country, Turkish coffee is served with mineral water or soda.

Macedonians' experience with Turkish coffee also coincides with Ottoman conquests. It is still one of the symbolic parts of family visits. However, unlike in Anatolia where coffee is served at the final stage of the visit, Macedonians prefers to serve it just after the visitors come in to welcome the guests. Turkish coffee is accompanied by a glass of water and often served with baklava or lokum (Turkish Delight).