The actor, who is performing in Shakespeare’s tragedy on the Olivier stage, is to make her National Theatre Live debut with one of her real reptile co-stars 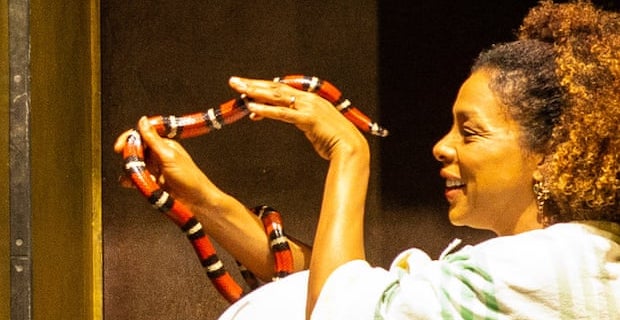 When the National Theatre’s Antony and Cleopatra is broadcast to cinemas in December, Ralph Fiennes and Sophie Okonedo won’t be the only stars getting ready for their close-up. Fiennes is no stranger to NT Live screenings but Okonedo will be making her debut, as will one of four real snakes used in the production.

It has not yet been decided which of the snakes, which are used in rotation throughout the play’s run, will appear in the broadcast. It could be Pork Pie, Hondo, Little J or Larry, who had no name when he arrived for the show but has been christened in honour of the National’s first artistic director and the Olivier stage on which he appears.

Okonedo, who has never worked with animals in the theatre before, said she and director Simon Godwin “felt very strongly before we started rehearsals that it would be a bit of a letdown if we brought out a rubber snake at the end of the show”. When she first handled snakes, she was surprised to find them “the most beautiful and fascinating creatures”. 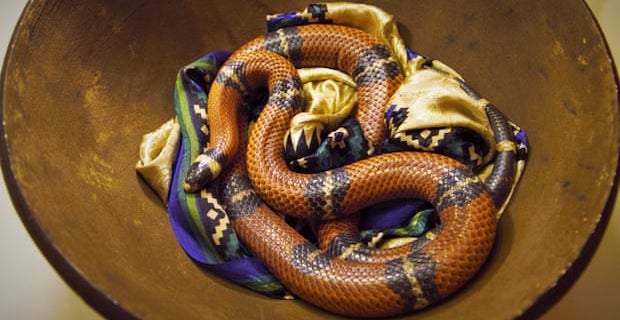 The snakes are owned by Mark Amey, who specialises in animal handling for film and television. Using his animals in rotation gives them time to rest in between performances. Amey says he is impressed by Okonedo’s multitasking. “‘She’s got to remember her lines and she’s also got to be a professional snake wrangler. She’s got to get the snake’s head at the right position at the same time as delivering the line at the right point. It’s a big ask.”

The reptiles are all milk snakes, a type of constrictor. They measure one metre long and were ch

Snakes, says Amey, “are very intuitive to how we feel. If we’re tense or stressed then they become stressed. If you relax and wind down, the snakes wind down.” Okonedo says “I adore all four of the snakes” and that they have become an integral part of her nightly warm-up. “I do lots of humming exercises, which seems to put them in a sort of stupor as they lay across my chest, which is relaxing for me and them, I guess.”

Guardian Today: the headlines, the analysis, the debate - sent direct to you

This is not the first time that real snakes have been used for Shakespeare’s tragedy at the National: Judi Dench shared scenes with a snake in a 1987 production co-starring Anthony Hopkins. In the play, an asp is used by the Egyptian queen to kill herself; she places it on her breast and tells the “poor venomous fool” to “be angry”.

The snakes are not the only animals to have taken centre-stage in London in recent years. The Almeida’s production of Ibsen’s The Wild Duck briefly features a real fowl and Jez Butterworth’s The Ferryman – now on Broadway after a successful London run – has a sensational scene with a goose. At the start of its preview period, Harry Potter and the Cursed Child used live owls, but then removed them from the production. The animal rights organisation Peta applauded that decision, saying: “The West End offers many innovative stage productions such as War Horse and The Lion King that create breathtaking effects without exploiting animals.”

osen for their dramatic colours. Pork Pie was a rescue snake who was rather obese, but the exercise of performing in the show has helped him lose weight. Another of Amey’s snakes, Mr Jangles, was removed from the production because he is “quite fidgety”. He is one of Amey’s most successful snakes on film but theatre work doesn’t suit a snake who likes to “do his own thing”. Hence the casting of Little J.

Four backstage snake carers work on the production. The animals have their own green room at the National: a vivarium, which is a wooden unit with sliding glass doors, controlled lighting and heating, complete with branches for the snakes to climb. 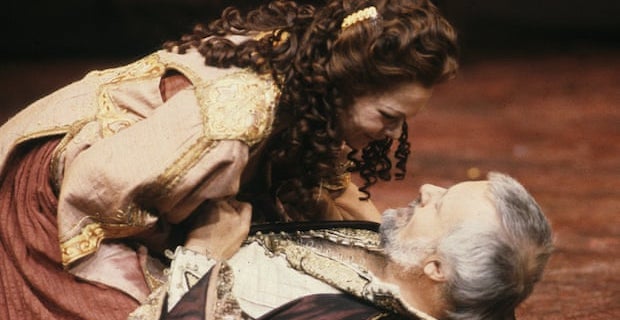 … we have a small favour to ask. Three years ago we set out to make The Guardian sustainable by deepening our relationship with our readers. The same technologies that connected us with a global audience had also shifted advertising revenues away from news publishers. We decided to seek an approach that would allow us to keep our journalism open and accessible to everyone, regardless of where they live or what they can afford.

More than one million readers have now supported our independent, investigative journalism through contributions, membership or subscriptions, which has played such an important part in helping The Guardian overcome a perilous financial situation globally. We want to thank you for all of your support. But we have to maintain and build on that support for every year to come.

Sustained support from our readers enables us to continue pursuing difficult stories in challenging times of political upheaval, when factual reporting has never been more critical. The Guardian is editorially independent – our journalism is free from commercial bias and not influenced by billionaire owners, politicians or shareholders. No one edits our editor. No one steers our opinion. This is important because it enables us to give a voice to those less heard, challenge the powerful and hold them to account. Readers’ support means we can continue bringing The Guardian’s independent journalism to the world.

If everyone who reads our reporting, who likes it, helps to support it, our future would be much more secure.

Keywords:
Love And HissesCleopatraSophie Okonedo
Your comment has been forwarded to the administrator for approval.×
Warning! Will constitute a criminal offense, illegal, threatening, offensive, insulting and swearing, derogatory, defamatory, vulgar, pornographic, indecent, personality rights, damaging or similar nature in the nature of all kinds of financial content, legal, criminal and administrative responsibility for the content of the sender member / members are belong.
Related News