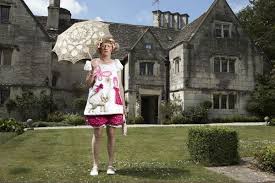 Artist Grayson Perry’s first building, a striking “secular chapel” filled with his artwork, opened today for holiday stays  but only for a limited period and by ballot. Perry has described the building, which stands alone among the rolling fields of rural north Essex, as the Taj Mahal on the river Stour because it tells the fictional story of a local woman, Julie, whose husband had the house built as a shrine on her death.

Upstairs there are two bedrooms with views across the landscape. “Having stayed there I know it as a very cosy, playful place, full of great little architectural games put in by Charles,” says Perry, referring to Charles Holland of FAT Architecture, the firm hired by Living Architecture to build the house.