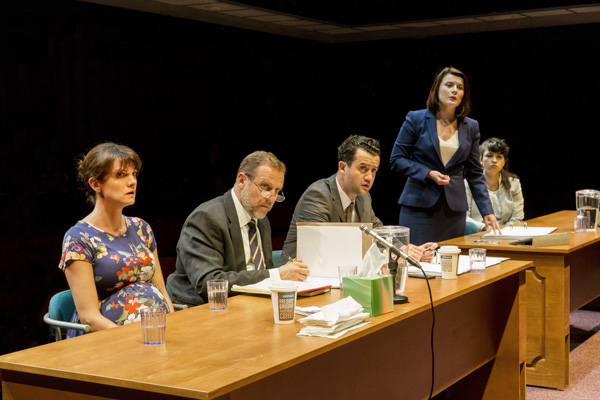 Today the Donmar Warehouse announced the full cast of Fathers and Sons, by Brian Friel, after the novel by Ivan Turgenev. Directed by Olivier Award-winner Lyndsey Turner - who returns to the Donmar having previously directed Friel’s Philadelphia, Here I Come! in 2012 - Turgenev’s masterpiece reveals a new world in conflict with the old, the uneasiness of clashing generations and the difficulty of staying radical as you move through life.

“The world won’t be remade by discussion and mock battles at dawn.”

Today the Donmar Warehouse announced the full cast of Fathers and Sons, by Brian Friel, after the novel by Ivan Turgenev. Directed by Olivier Award-winner Lyndsey Turner - who returns to the Donmar having previously directed Friel’s Philadelphia, Here I Come! in 2012 - Turgenev’s masterpiece reveals a new world in conflict with the old, the uneasiness of clashing generations and the difficulty of staying radical as you move through life.

Two young men arrive at a country estate, fresh from university: one, the son of the landowner, the other a brilliant and charismatic radical, proclaiming a dangerous new philosophy. But their warm welcome cools as the new house guest attacks the values of his hosts, bringing to the surface the tensions between one generation and the next. Over the course of a summer, political ideals are tested by filial duty and the arrival of Anna, a mysterious visitor whose presence stirs the heart and threatens a friendship.

Fathers and Sons speaks of the heartbreak of being a parent and the terrible compromise of growing up. Brian Friel (playwright) is considered one of the greatest living Irish dramatists, having written over 30 plays across six decades. He is best known for plays such as Translations, Philadelphia, Here I Come! and Dancing with Lughnasa, which won Best Play at the Tony Awards, Olivier Awards and New York Drama Critics Circle. Friel co-founded Field Day Theatre Company in 1980 with actor Stephen Rea where they staged Translations which went on to win the Ewart-Biggs Peace Prize. In the late 1990s Friel wrote a number of adaptations of the work of Anton Chekhov and Henrik Ibsen.

Lyndsey Turner (Director) most recently directed Machinal on Broadway and in the UK Chimerica, which transferred to the West End after a sell-out run at the Almeida; Turner was awarded the Best Director prize at the 2014 Olivier Awards for the production, which was also named Best New Play.  She has previously directed the critically acclaimed Philadelphia, Here I Come! at the Donmar in 2012. She is an Associate Director of Sheffield Theatres and has worked extensively with the Gate Theatre (Associate Director) and the Royal Court (Trainee Associate Director). Previous director credits include the award-winning Posh (Royal Court and Duke of York’s), The Way Of The World, Alice (Sheffield Crucible), Edgar and Annabel, There Is A War (National Theatre), Our Private Life, A Miracle, Contractions (Royal Court), Joseph K, Nocturnal (Gate Theatre) and My Romantic History (Traverse, Bush Theatre, Sheffield Theatres).

Elaine Cassidy (playing Anna) previously appeared in Les Parents Terribles as part of the Donmar Warehouse’s Trafalgar season. Cassidy is well known for her screen work, having appeared in two series of The Paradise (BBC). Her film credits include The Others, Disco Pigs and Felicia’s Journey. Theatre credits includeThe Crucible (RSC), Scenes from the Big Picture (National Theatre) and There Came A Gypsy Riding(Almeida).

Caoilfhionn Dunne (playing Fenichka) returns to make her second appearance at the Donmar, having recently performed in Conor McPherson’s The Night Alive for which she was nominated for the Evening Standard Award for Best Newcomer. Dunne also appeared in the New York transfer of the production at the Atlantic Theater. Other theatre includes The Veil (National Theatre) and King Lear (Abbey Theatre, Dublin). Her film and television credits include Love/Hate, Vexed, Wrath of the Titans, Corduroy and Little White Lies.

David Fielder (playing Prokofyich / Timofeich) makes his Donmar debut in Fathers and Sons. Fielder has worked extensively with the RSC, appearing most recently in The Taming of the Shrew, Hamlet, As You Like Itand All’s Well That Ends Well. Other theatre includes The Phoenix of Madrid and Iphigenia (both Theatre Royal Bath), The Sunshine Boys (Oldham Coliseum), Bronte and Heroes (both Newbury Watermill).

Joshua James (playing Arkady) makes his Donmar Warehouse debut in Fathers and Sons. James graduated from RADA in 2012 and since then has performed in some of the most established theatres in the UK. Most recently appearing as Rafe Sadler in Wolf Hall and Bringing Up The Bodies (RSC), he has also appeared at the Royal Court in No Quarter, The Ritual Slaughter of George Mastromas and Love and Information. Television credits include Utopia (Channel 4) and Silent Witness and Identity (both BBC).

Karl Johnson (playing Vassily) makes his Donmar Warehouse debut in Fathers and Sons. He most recently appeared on stage in Barking in Essex (Wyndham’s Theatre). Johnson has performed frequently at the National Theatre, appearing in Danny Boyle’s Frankenstein, Conor McPherson’s The Seafarer and Peter Gill’s Scenes from The Big Picture. Johnson has an established television career, appearing in BBC productions Call the Midwife, Merlin and Larkrise to Candleford.

Tim McMullan (playing Pavel) returns to the Donmar having previously appeared in The Front Page in 1998. McMullan’s long career in theatre includes regular roles at the National Theatre, including Present Laughter, Coram Boy, The Alchemist and The Cherry Orchard. His most recent stage role was as Angus in Chichester Festival Theatre’s Neville’s Island. Notable film credits include The Woman in Black, The Queen and Onegin.

Seth Numrich (playing Bazarov) makes his Donmar Warehouse debut in Fathers and Sons. In 2013 Numrich won Best Newcomer at the Evening Standard Awards for his UK theatre debut in Sweet Bird of Youth (Old Vic). Numrich is also well known for his roles in feature films Private Romeo and How to Kill A Mockingbird, and in US TV series Turn (AMC) and Gravity. He made his Broadway debut in The Merchant of Venice (Broadhurst Theatre) and has also appeared on Broadway in Golden Boy (Lincoln Centre) and War Horse (Lincoln Centre) for which he was nominated for the Outer Critics Circle Award for Outstanding Featured Actor in a play his role as Albert. Seth Numrich is appearing in Fathers and Sons with the permission of UK Equity, incorporating the Variety Artistes’ Federation, pursuant to an exchange program between American Equity and UK Equity.

Phoebe Sparrow (playing Katya) makes her Donmar Warehouse debut in Fathers and Sons. Sparrow recently graduated from Mountview Academy. Credits there include: Measure for Measure (Isabella), Hot Mess (Twitch) and The Way of the World (Millamont). Other credits include The Birthday Party (Meg) and Cover (Rebecca) both Dugout Theatre.

Lindy Whiteford makes her Donmar Warehouse debut in Fathers and Sons. Whiteford has a worked in a variety of stage and screen roles. Her television credits include What Remains (BBC), A Touch of Frost(Yorkshire Television) and Casualty (BBC). Stage credits include Josie Rourke’s production of Men Should Weep (National Theatre), Twelfth Night (Bristol Old Vic) and A Free Country (Tricycle).