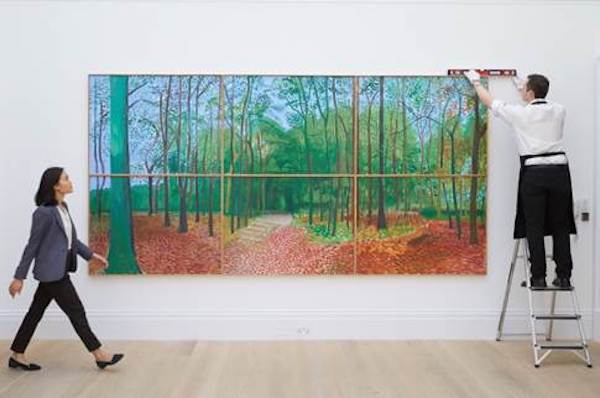 LONDON, 30 September 2016 – On 17 November 2016, Sotheby’s New York Contemporary Art Evening Auction will include Woldgate Woods, 24, 25 and 26, 2006, the first work from David Hockney’s famed Woldgate Woods series to appear at auction. Measuring over three and half meters in diameter, the work, captivated audiences as part of Royal Academy’s blockbuster 2012 exhibition David Hockney: A Bigger Picture, which featured spectacular large-scale paintings inspired by the East Yorkshire landscape. With an estimate of $9/12 million, Woldgate Woods, 24, 25 and 26, 2006 is set to establish a record for the artist at auction.

Grégoire Billault, Head of the Contemporary Art Department, noted: “David Hockney stands alongside Francis Bacon and Lucian Freud as one of the pillars of post-war British art. Ten years after we redefined the market for his work with The Splash, Sotheby’s is set to once again establish a new record with Woldgate Woods, 24, 25 and 26, 2006. With the opening of the Tate retrospective early next year, along with collectors’ tremendous appetite for quality, now is the perfect time to present one of the great accomplishments of the artist’s late career.”

Throughout 2006, Hockney executed a limited series of paintings of the Woldgate Woods in his native Yorkshire, charting the changes in light and colour as the seasons passed. Limited by the size of the canvas he was able to fit through the staircase at his Bridlington studio, he devised a method of using multiple canvases in order to achieve the desired scale. Woldgate Woods, 24, 25 and 26 October 2006, capturing the autumnal colors of East Yorkshire, is composed using six of these canvases. The huge public and critical success of this body of work has led to this quiet corner in the north east of England becoming known as ‘Hockney Country’, with the local tourist board even creating a Hockney Trail inspired by the locations immortalized in the series.

Already a godfather of contemporary British art, Hockney’s glorious series of paintings of the East Yorkshire Wolds transformed him into undoubtedly one of the greatest and most obsessive painters of the English countryside. Woldgate Woods, 24, 25 and 26 October 2006, appears at auction ahead of Hockney’s major retrospective at Tate Britain, which opens in February 2017, and in the wake of the remarkable ‘82 Portraits and 1 Still-life’ at the Royal Academy in 2016.