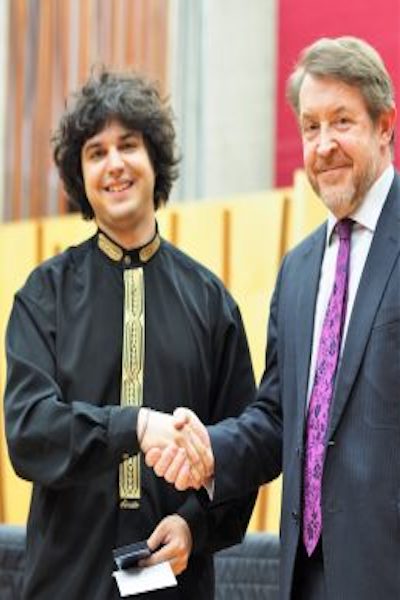 Jamal Aliyev was awarded the £10,000 first prize and a prestigious Musicians’ Company silver medal. The audience prize of £500 was won by another cellist, Abel Selaocoe. The panel of adjudicators included the renowned cellist, Mats Lidström, Helen Sprott (Managing Director of the Philharmonia Orchestra) and David Syrus (Head of Music at the Royal Opera House, Covent Garden). The Prince’s Prize was established to mark the installation of His Royal Highness The Prince of Wales as an Honorary Freeman of the Worshipful Company of Musicians in 2003 and has been generously endowed by The Eranda Rothschild Foundation and Rothschilds Bank, in memory of Leopold de Rothschild, a member of the Musicians’ Company for over fifty years.

Each year the Musicians’ Company, one of the oldest and most respected charitable companies in the City of London, donates over £220,000 in scholarships and awards in support of young musicians at the start of the careers across all musical disciplines. The Prince’s Prize is to recognise ‘the most promising young instrumentalist or singer from the Company’s award winners’ in the current year.

Jamal Aliyev is a BBC Introducing Classical Artist and is currently studying at the Royal College of Music with Thomas Carroll. His debut album Russian Masters, recorded with Anna Fedorova, was recently released by Champs Hill Records. Jamal has appeared on BBC Radio 3, including In Tune and his Radio 3 live broadcast solo debut with the BBC Concert Orchestra. Performance at festivals include: the Menuhin Festival in Switzerland, Enescu Festival in Romania and Kronberg Festival in Germany. Jamal is the winner of several international competitions: Muriel Taylor Cello Competition (2014), Croydon Concerto Competition (2015), Bromsgrove International Competition (2015) Eastbourne Concerto Competition (2016), and Sir Karl Jenkins Music Competition (2017); and as winner of the RCM Concerto Competition Jamal will be playing the Dvořák Cello Concerto with the RCM Symphony Orchestra conducted by Jac van Steen in June Jamal’s recent performances include: Royal Albert Hall and Royal Festival Hall, the Forbidden City Concert Hall in Beijing, Reims Cathedral and he will; be jointly giving a Wigmore Recital as part of the Musicians’ Company Concerts Series with the Concordia Foundation Artists’ Fund on 22nd May. Jamal plays on a Giovanni Battista Gabrielli 1756, on loan from a patron of the Beares International Violin Society.