Banksy: How Love is in the Bin's shredding did not go to plan

The partial shredding of a Banksy artwork didn't go entirely to plan, the artist has confirmed. 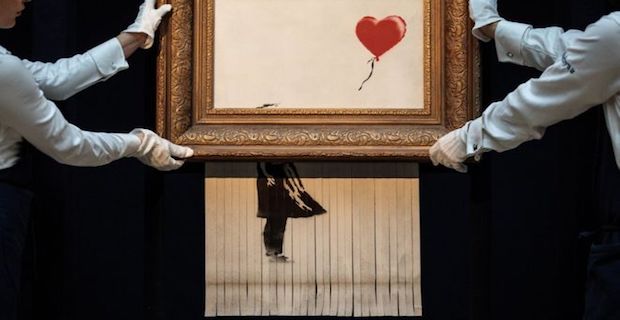 Love is in the Bin self-shredded in its frame immediately after selling for £860,000 at Sotheby's last week.

Now, Banksy has uploaded a video suggesting the entire canvas was supposed to shred, and not just two thirds of it.

A clip of a canvas shredding in full is seen in the video with the caption: "In rehearsals, it worked every time."

The video shows the frame, complete with its shredder, being assembled in Banksy's studio.

It also shows new footage from inside the auction room - including a clip of the button which triggered the shredding being pressed.

Alex Branczik, Sotheby's head of contemporary art in Europe, has also reiterated in a new interview that the auction house was not in on the stunt.

He said the reason the shredder wasn't detected by Sotheby's staff is they had been instructed the frame was a key part of the work.

Speaking to The Art Newspaper, Branczik explained: "Pest Control [Banksy's authentication board] said very clearly: the frame is integral to the art work.

"Which it was," he added, "just not in the sort of way that we thought.

"We also had a third-party conservator look at the work."

Asked how the conservator did not spot the frame's double thickness and apparent weight from the attached shredder, he replied: "You address what you see, it was more like a sculpture. If it says the frame is integral, you don't rip it apart." 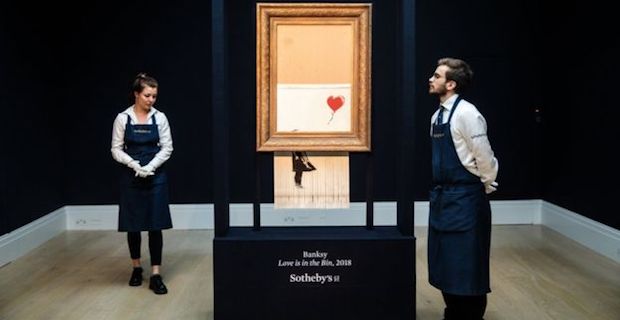 This is not the first time a work of art has been created by accident or opportunism.

Andy Warhol's famous collection of Campbell's soup cans started off as individual pieces which didn't sell particularly well, and then were brought back together and sold as a single unit as if that was always the intention.

Even dear old Marcel Duchamp, who as we know started all this, only retrospectively decided his bicycle wheel placed on top of a stool was a work of art, as opposed to an amusing distraction for him in his studio in Paris.

So there is precedent for an object to be retrospectively deemed an artwork by the artist.

But that doesn't answer the question which is crossing most people's minds, I would imagine; would it have been worthless if the action had succeeded, and the canvas had fully shredded?

Possibly. But, I think, unlikely.

Judging by the title that Banksy has given the work, the intention was for the artwork to be a shredded canvas on the floor, beneath an empty frame.

So you could argue that the installation piece of an empty frame on a wall, with the shredded canvas beneath it, would actually be worth more, than what could be considered an 'incomplete' artwork, stuck in the frame.

The new Banksy video also shows the reaction of Oliver Barker, the auctioneer on the night - who appears both miffed and worried by the shredding.

Barker pointed out to the Art Newspaper that Banksy often employs misshapen frames in his works, "and that's part of the joke".

"The accusation that we were somehow negligent in the way this was catalogued does not stand up. We did everything," he added.

"Going forward, are we going to question a frame like this? Absolutely."

A Sotheby's spokesman said: "The new narrative is that Banksy did not destroy a work on its premises, he created one, adding value not detracting.

"It is a different work to the one that appeared in the catalogue, but nonetheless it is an intentional work of art, not a destroyed painting."

Keywords:
SothebysBanksy
Your comment has been forwarded to the administrator for approval.×
Warning! Will constitute a criminal offense, illegal, threatening, offensive, insulting and swearing, derogatory, defamatory, vulgar, pornographic, indecent, personality rights, damaging or similar nature in the nature of all kinds of financial content, legal, criminal and administrative responsibility for the content of the sender member / members are belong.
Related News