At the Crossroads, Last Exit Before the Status Quo

Osman Can was the Constitutional Court rapporteur in the 2008 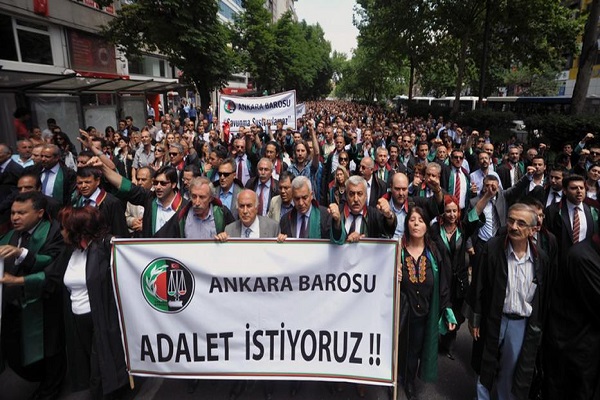 Osman Can was the Constitutional Court rapporteur in the 2008 closure case filed against the Adalet ve Kalkınma Partisi (Justice and Development Party) (AK Party). During the trial period, he was one of the persons whose names mentioned most often in the media. Can successively published new books in the recent years. This article aims to analyse his book ‘At the Crossroads: Last Exit before the Status quo’ published in 2012.

The book consists of three parts in general.  At the beginning of the first chapter, the question of whether an ideal constitution is possible is examined by discussing the concept of constitution. In the rest of the chapter, the history of constitutionalism in the world is summarised and Turkey’s constitutional experience is briefly presented from the era of Ottomans up until today. This section swiftly displays the history of the Turkish Constitutionalism in parallel to the coups in Turkish history and focuses on the constitutions of 1921, 1924, 1961 and 1982. The second part provides a discussion of the unalterable constitutional provisions. This section discusses how creating rules that are not open to interpretation is just a delusion and it specifically analyses ‘The ‘Contradictions of Secularism’ clause.  In the last chapter of the book, the basic obstacles against the preparation of a new and civil constitution in Turkey are analysed. In this way, the writer analyses Turkey’s ‘nation-state’ legacy at great length. The last section is completed with the debate about the new constitutional process in a changing world.

According to the author’s main argument, the constitutional debates in Turkey are not only about legal texts but they are actually about a fundamental change in Turkey. The author insists on an ideal civil constitution and argues that all institutions that affect human life in Turkey need to undergo a significant change. The importance of the book stems from the importance of the constitutional issue for the community. As the author states, “[…] only the way to put pen to paper of constitutions is related to law. In fact, the constitution itself is a political decision” (Can, 2012). Accordingly, constitutions mean more than technical texts. They can be defined as political conventions that directly shape the life of the society and their content are of interest to the entire community.

There is a serious critique of the nation-state and militarism throughout the book. Furthermore, the implementation of secularism in Turkey in an anti-democratic way has been criticised heavily. The author claims that a new constitution that only emphasizes expanding freedoms and that neglects structural reforms will not be a solution to Turkey’s current problems. According to the author, the constitutional debate should be primarily on the organisation of the state because some government agencies can be more subversive than the pro-coup mind-set, as long as the structure of the state’s organization enables them. In this respect, according to the book, even if a new constitution underlines freedoms, if the state’s organisational structure does not allow them, freedoms would remain written on the constitution and would not exist in real life. To explain this argument, the author emphasises the 1921 Constitution and recalls that this constitution was called “Fundamental Organisation Law” because it mainly focused on the government’s operational structure, rather than making laws for freedoms (Can, 2012: p. 157).

We need to focus on the second part of the book titled as ‘Freedom and Irrevocable Provisions’ which is an outstanding part. In this section, author argues that there should not be any unalterable provisions in the ideal constitution. According to him, a constitution including irrevocable provisions is in contradiction with a ‘democratic, secular, social state of law.’ It is his God-given right to interpret a constitution including irrevocable provisions as anti-democratic and perhaps; it can be considered coherent with a universal point of view. For example, since irrevocability would mean tabooing, the coexistence of secularism and irrevocability indeed causes a paradox. Nevertheless, the book neither mentions which experiences in Turkey eventually led to the need for irrevocable provisions and nor discusses the consequences of placing them in the new constitution. A ​​more satisfying argument in this respect –if applicable– would strengthen the author’s opinion or would prevent the feeling of unfounded allegations in the eyes of the reader. In other words, the book can be a criticised as follows: Would not it create a risk of bringing a more anti-democratic environment to Turkey, if the irrevocable provisions were removed from the constitution since they create inconsistencies within the constitution’s own content and they are seen anti-democratic (considering Turkey’s unique dynamics related to the religion-state relationship, its imperial past and nation-building process’)? I abstain from falling into an elitist and Jacobin position when asking this question. My confusion stems from the author’s claim that the solution is not at the West and that Continental Europe’s sense of homogeneous nation-states and constitutional traditions cannot be a solution to changing Turkey.

Due to the framework of the book, the author is not expected to indicate an in-depth analysis of the power change in Turkish government, but a deeper discussion of the consequences of the acceptance of a new constitution in the present circumstances could have been presented in the his work. I suppose that what precludes this is the basic approach felt in the whole book. Considering the main idea of the book and its name in a discursive way, it can be stated that the book has been written with the presumption that the preparation of a new constitution will end the status quo and pave the way for the transition to a democratic environment.

The most important effect of the book on my personal view is the fact that unless a sufficient degree of awareness on democracy and civil society is created in society, changing the constitutional order would be of little use. I had a naive belief that the most democratic constitution imported from Norway or another Western country could be Turkey’s cure. But the author’s continuous emphasis on human factors, and underlying the important fact that a society and bureaucracy, which cannot internalise democratic awareness, will not be able to form a democratic environment in practice, led me to rethink my ideas. In fact, this situation is a little bit discouraging.  Despite Turkey’s 200 years of on-going Westernisation process and over 100 years of parliamentary experience, its inability to reach at a certain level where democratic consciousness is absorbed with all institutions, politicians and citizens in the near future, prevents one from expecting too much of any change to the constitutional order. Therefore, –although it might seem as an Orientalist perspective– perhaps the belief affected by this book that Turkey can create a democratic constitution in the universal sense in the short and medium term is not realistic resulting from the fact that there are still limited issues that Turkey can agree on at the social and political level. As mentioned in the book: “The Constitution itself […] is not the solution. It is an instrument that can create an opportunity for solution because what will establish peace refers to the social and political negotiations, not the state and its norms” (Can, 2012: p. 220). Yet according to the author, as long as Turkey’s nation-state concept, its interpretation of nationalism and its perspective on the bureaucracy of security does not change, a constitution having the characteristics of a social contract will not be developed ​​in Turkey (p. 203). Therefore, a new constitution prepared without coming to an agreement on such issues, perhaps will not bring more than a stillborn baby to Turkey.

This publication as follows: