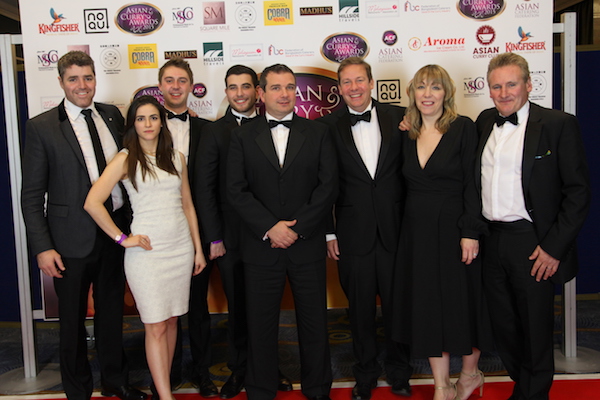 Over 1,000 guests, including the county’s leading restaurateurs with their staff and customers, plus ambassadors and embassy officials, food writers, politicians, VIPs and celebrities gathered for a glittering gala dinner at the Grosvenor House Hotel in London on Sunday 23rd October, to honour the winners of Asian Curry Awards 2016.

The Asian Curry Awards recognise the best in the industry, encouraging ever higher standards and to inspire the next generation of chefs and restaurateurs to join the dynamic sector.

Mohammed Sultan of Charcoals (Glasgow) was named Maitre d’ of the Year.

“Although the hospitality sector continues to thrive, competition has never been tougher.  Rising costs and skills shortages and intense competition has never been tougher, this is a celebration of those who have risen to the challenge,” said Yawar Khan, Chairman of the Asian Catering Federation in his keynote speech.  He then called on the Government to embrace the UK opportunity created by the Referendum decision to leave the EU, by easing work visa restrictions on oversea chefs.  The Federation backs the introduction of temporary two-year visas, similar to those offered in the Netherlands.

Jane Ellison, MP, Financial Secretary to the Treasure addressed the audience whose sector contributes around £4.5 billion to the British economy, creates about more than 100,000 jobs, promised the Government was listening to calls to tackle the acute shortage of skilled curry chefs.

This year’s Asian Curry Awards shortlist, determined by over 100,000 votes from spice loving members of the public, has been announced.  A team of judges, led by Pat Chapman, editor of the Cobra Good Curry Guide, toured the country to determine the winners.  Chapman was pleased to witness ever higher standards in the UK’s Asian restaurants, with a trend towards healthy, authentic regional dishes with modern gastro influences.

The trend was confirmed by Graham Corfield, MD of Just Eats MD reported that the market for Asian Cuisine demand for Asian cuisine had grew 30 percent in the first six months of this year, with online orders for healthier options also up 30 percent.

The Asian Curry Awards are design to recognise the best in the industry, encouraging ever higher standards and to inspire the next generation of chefs and restaurateurs to join this dynamic sector.

The awards are a joint initiative, organised by the Asian Catering Federation and Federations of Bangladeshi Caterers and supported by Just East, Cobra Beer and Square Mile Insurance.