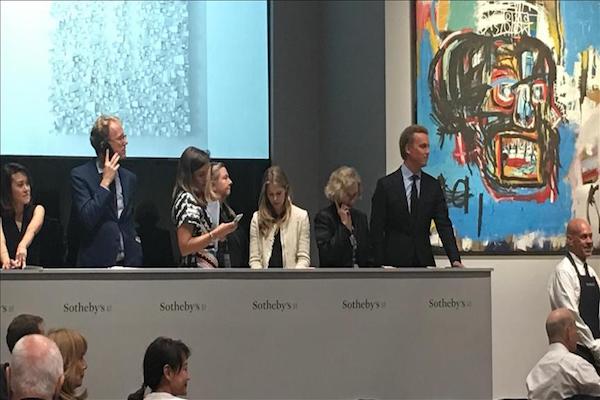 Basquiat's 1982 painting was sold to Japanese e-commerce mogul Yusaku Maezawa, who called himself "a lucky man" in a Twitter post after the Sotheby's auction. "I am happy to announce that I just won this masterpiece," Maezawa said on Instagram. "When I first encountered this painting, I was struck with so much excitement and gratitude for my love of art. I want to share that experience with as many people as possible." Maezawa later said in a statement that he would loan the piece to exhibitions around the world, before taking it to his hometown, Chiba to be displayed at his museum. "I hope it brings as much joy to others as it does to me, and that this masterpiece by the 21-year-old Basquiat inspires our future generations," he said. "Untitled" surpassed Andy Warhol's "Silver Car Crash (Double Disaster)", which sold for $105 million in 2013. Maezawa, founder of Japan's largest fashion retail website, has an estimated net worth of $3.6 billion according to Forbes. He bought another Basquiat last year, again called "Untitled", for $57 million.