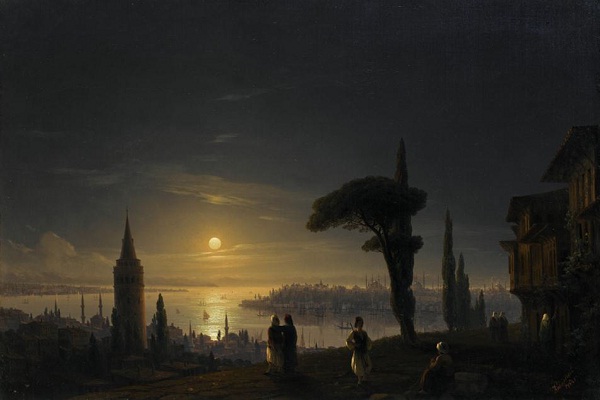 The artist visited the Ottoman capital several times throughout his life and returned to the subject often. Aivazovsky’s talents were recognised by Sultan Abdülaziz (1830-1876) who commissioned a series of views of Constantinople in 1874 to decorate the Dolmabahçe Palace. Sotheby’s London achieved the record price for a Turkish view by Aivazovsky with View of Constantinople and the Bosphorus, (1856) which sold for £3,233,250 in April 2012.

The Galata Tower by Moonlight, 1845 (above) is the earliest view of Constantinople by Aivazovsky to appear on the market for over a decade. It was painted after the artist’s very first visit to the city in 1845, when he accompanied the Imperial Navy’s expedition to Asia Minor. Depicting the medieval Galata Tower, it is likely to have been presented to Emperor Nicholas I in November of that year.

Moonrise over the Golden Horn, 1886 (below left) depicts the principal landmarks and mosques of the city from the Eyüp district. It comes to market for the first time from an esteemed private collection and its appearance at auction marks an important addition to scholarship on Aivazovsky’s Turkish oeuvre.

Shipping on the Bosphorus, Constantinople, 1900 (below right), depicts the historic Arnavutköy district of the city and is one of Aivazovsky’s final compositions. The impressionistic handling of paint – extremely unusual for the artist – marks an important technical departure, remarkable at this stage in his career. The free, liquid brushstrokes here recall the landscapes of his French contemporary Eugene Boudin, and of Claude Monet.