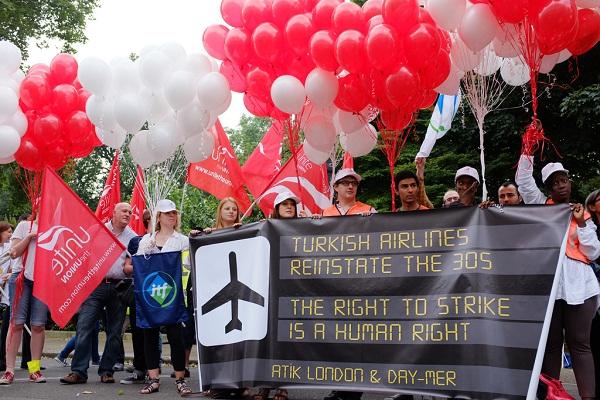 Against the backdrop of protestors bearing banners and 305 red and white balloons, senior officials from the ITF and Unite tried to hand in to the Turkish Embassy a ‘gold Olympic medal’ made by the workers’ trade union Hava-Is but were denied access.Stephen Cotton, ITF Maritime Co-ordinator, who took part in the rally, said: “Our good-natured and vocal protest served to remind PM Erdogan that Turkey’s reputation internationally rests as much with the way its workers and their trade unions are treated as with the Olympic values of its athletes competing in the 2012 Games. It’s a shame we were not allowed to deliver the ‘gold medal’ but it didn’t prevent us from making our point strongly. “These aviation workers were sacked by text, phone and email for protesting when their legal right to strike was removed. The government owns the majority share in Turkish airlines so should act now to reinstate the workers and to call a halt to attacks on workers’ and union rights.“ ITF General Secretary David Cockroft added: "At the same time, the situation in DHL Turkey looks worrying. Around 25 workers have been sacked from several warehouses in what appears to be anti-union action. This week the ITF and UNI have made a number of proposals to facilitate talks between DHL Turkey and Tumtis, the union representing the sacked workers. Tumtis has a strong track record of winning workers' rights in the global delivery sector, supported by the international trade union family. The ITF and Tumtis are working hard to avoid a de-escalation of this dispute. Solutions for workers need to be found ASAP, interference needs to end and all parties need to sit down and talk. We are hopeful that DHL will play their part in achieving this."