Turkey aims to increase its trade with the EU in euro: Turkish Treasury and Finance Minister Berat Albayrak 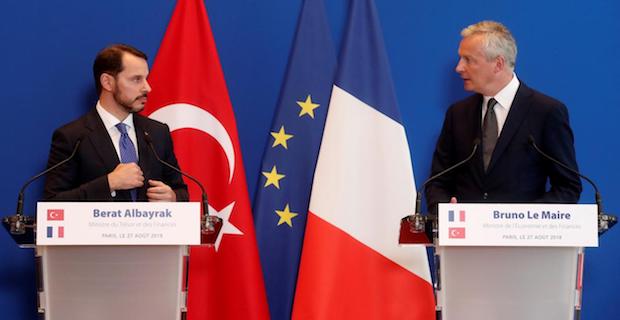 Turkey and France on Monday agreed to further boost their economic ties, including in the fields of energy, agriculture, technology and defense industry, Turkish Treasury and Finance Minister Berat Albayrak said in Paris.

Speaking at a joint news conference with French Economy and Finance Minister Bruno Le Maire, Albayrak said: "We also think that improving cooperation in the financial sector, banking and insurance sectors will be beneficial."

The two countries also reiterated their stance to jointly take action against the U.S. move targeting Turkey, the EU and others, he said.

"Those kind of steps [the U.S. has] taken with political motivations will affect not only the global financial system but also global trade and regional stability; it will create uncertainty and great problems."

He said the U.S. approach would also lead to chaos, which in turn feeds terrorism and refugee crises.

Albayrak added: "The dollar, unfortunately, has lost its status as a reliable instrument in global trade".

He said Turkey aims to increase its trade with the EU in euro.

"France will continue to back all French companies who trade and want to trade with Turkey," Le Maire said.

Turkey and the U.S. are currently experiencing rocky relations after Washington imposed sanctions on two Turkish Cabinet ministers for not releasing an American pastor facing terrorism-related charges in Turkey.

On Aug. 10, the U.S. President Donald Trump ramped up his attack on Turkey by doubling U.S. tariffs on Turkish aluminum and steel imports. In retaliation, Turkey increased tariffs on several U.S.-origin products, including alcohol and tobacco products and cars on Aug. 15.

Keywords:
Turkish Treasury And Finance Minister Berat AlbayraBruno Le MaireFrench Economy And Finance Minister
Your comment has been forwarded to the administrator for approval.×
Warning! Will constitute a criminal offense, illegal, threatening, offensive, insulting and swearing, derogatory, defamatory, vulgar, pornographic, indecent, personality rights, damaging or similar nature in the nature of all kinds of financial content, legal, criminal and administrative responsibility for the content of the sender member / members are belong.
Related News