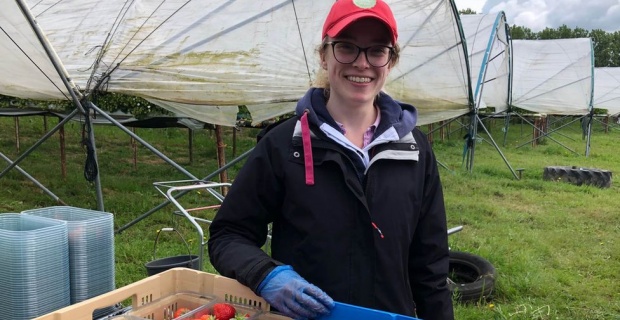 A recent government report warned that labour shortages "caused by Brexit and accentuated by the pandemic" were badly affecting our food and farming sector, with fruit suppliers often forced to leave produce rotting in the fields.One fruit farm in Suffolk is already feeling the pinch. With strawberries ripe and ready, why are there not enough people to pick them?Presentational grey line'We need pickers'Famer Andrew Sturgeon believes if the UK cannot get people to pick fruit and vegetables the country will import more foodAndrew Sturgeon owns Lindsey Lodge Farm near Hadleigh, Suffolk, and says that from the "end of May into June we are full on, picking fruit".

"We need pickers, there is a limit to the amount of time you could expect anyone to pick fruit," he says."We have 11 pickers now but we'd like to get 15 or 16."He is hopeful he will "get some people in the next few weeks" as school and university students become available."The constant battle of balancing supply and demand is probably the biggest worry but you've got to have the supply, you've got to have the pickers to get into that position of concern," he says."We had a system where if someone [from the EU] dropped out from our team they would introduce a friend or relative to take their place. That's no longer possible and that's caused the problems we're seeing today."

Last year, the government issued 30,000 seasonal worker visas, but Mr Sturgeon said the "horticultural industry needs 80,000 or 90,000 workers".
He says following Brexit, people from the EU "will have chosen to go home and those are the people we need replacing".
"It was very easy to get pickers and now it's not very easy," he adds.
"This spring, we've already seen a large area of asparagus in the Woodbridge area did not get picked, that's a huge loss of income for the farmer and most probably meant we imported asparagus."
Presentational grey line

'It's because of Brexit'

Fruit picker Emmanuel Ciocanel says friends have gone to work elsewhere in Europe rather than the UK
Emmanuel Ciocanel, from Romania, has been working at the Suffolk farm for 12 years.
He says he enjoys the work and "because I work with family - my brother, my sister, my cousin - we keep coming back here and working".
Mr Ciocanel says he finds other temporary or seasonal work through an agency for the rest of the year, and sometimes returns to Romania.
He believes there is a lack of fruit pickers "because of Brexit".
"I have some friends and family in Romania who want to come but because of the paperwork they cannot."
Some of his friends have found seasonal work elsewhere because of the ending of free movement and the UK's exit from the EU, he says.
"They were in England, [now] they go to Germany [because] they don't know what will happen after Brexit.
"This year we are short of people, which will be more hard for us," he adds.

Keywords:
Seasonal Fruit PickingBrexitPandemicUK Labour ShortageFruit Pickers
Your comment has been forwarded to the administrator for approval.×
Warning! Will constitute a criminal offense, illegal, threatening, offensive, insulting and swearing, derogatory, defamatory, vulgar, pornographic, indecent, personality rights, damaging or similar nature in the nature of all kinds of financial content, legal, criminal and administrative responsibility for the content of the sender member / members are belong.
Related News