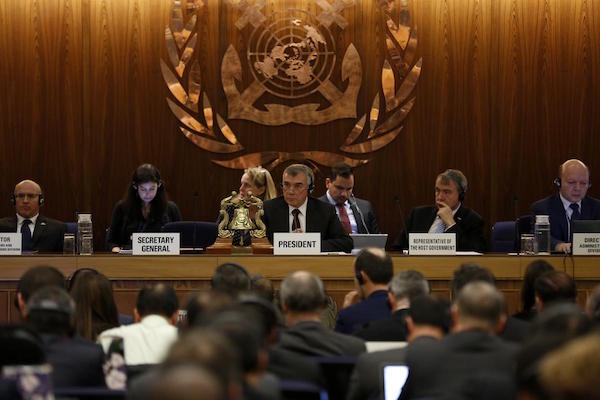 AVRUPA/LONDON-​IMO Secretary-General Koji Sekimizu singled out the adoption of the mandatory Polar Code as a historic milestone in IMO's work to protect ships, seafarers and passengers in the harsh environment of the waters surrounding the two poles and the fragile environment itself. The 29th session of the IMO Assembly opened this morning (23 November) at IMO Headquarters in London. More than 1,000 delegates from IMO Member States, international governmental and non-governmental organizations were present to hear Secretary-General Koji Sekimizu outline some of the Organization's major achievements during 2014 and 2015 in his opening address.

He singled out the adoption of the mandatory Polar Code as a historic milestone in IMO's work to protect ships, seafarers and passengers in the harsh environment of the waters surrounding the two poles and the fragile environment itself.

He also highlighted the adoption of the new mandatory code for ships fuelled by gases or other low‑flashpoint fuels, the IGF Code.

In the environmental field, Mr. Sekimizu reminded delegates that the entry into force of the Ballast Water Management Convention was "tantalizingly close". The requisite number of States have ratified the convention but the aggregate tonnage of their fleets is just short of the amount required to trigger entry into force.

He added, "During this biennium, a great deal has been achieved in removing barriers for ratification and also providing confidence to Administrations and shipowners that the convention is ready for implementation and that this can be done in a fair and transparent way."

Looking ahead to the United Nations Convention on Climate Change (COP 21) in Paris, Mr. Sekimizu reiterated his belief that IMO was the only place for detailed debate and adoption of technical and operational measures for international shipping.

Mr. Sekimizu completes his four-year term as Secretary-General on 31 December 2015. The IMO Assembly is invited to endorse the decision of the IMO Council to elect Mr. Kitack Lim (Republic of Korea) as the next Secretary-General.

The outgoing President of the Assembly, Mr. Ünal Çeviköz, former Ambassador of the Republic of Turkey to the United Kingdom, and the incoming President, Mr. Federico Trillo-Figueroa y Martínez-Conde, Ambassador of the Kingdom of Spain to the United Kingdom and Permanent Representative of Spain to IMO, also addressed the Assembly.

Mr. Robert Goodwill, Parliamentary Under-Secretary of State for Transport of IMO's host country the United Kingdom, also welcomed delegates to the Assembly, which runs until 2 December 2015.

The Assembly elected the following officers:

Mr. Federico Trillo-Figueroa y Martínez-Conde, Ambassador of the Kingdom of Spain to the United Kingdom and Permanent Representative of Spain to IMO.

1st Vice-President: The Honourable Binyah C. Kesselly, Commissioner and Chief Executive Officer of the Liberia Maritime Authority and Permanent Representative of Liberia to IMO; and

2nd Vice-President: His Excellency Mr. Keiichi Hayashi, Ambassador Extraordinary and Plenipotentiary of Japan to the United Kingdom and Permanent Representative of Japan to IMO

The Assembly is IMO's highest governing body.  All 171 Member States and three Associate Members are entitled to attend, as are the intergovernmental organizations with which agreements of co-operation have been concluded, and non-governmental organizations in consultative status with IMO.  The Assembly normally meets once every two years in regular session.  It is responsible for approving the work programme, voting the budget and determining the financial arrangements of the Organization.  It also elects the Council.