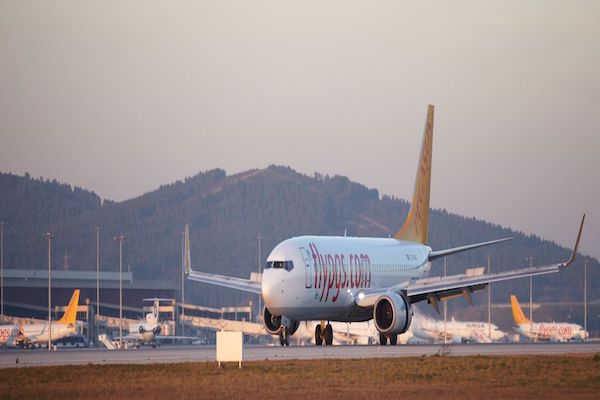 Pegasus Airlines has evaluated its performance for 2016 whilst disclosing its targets for the future. Despite all the developments that have put pressure on the aviation sector in 2016, Pegasus succeeded in increasing its guest numbers by 8.1% to 24.14 million, and its turnover by 6.2% to TRY 3.7 billion. Pegasus CEO Mehmet T. Nane stated that the airline expected a cautious recovery in the aviation sector for 2017, but real growth would be experienced from 2018 onward.

Pegasus' growth outperformed the sector in 2016

Speaking at the press conference, Mehmet T. Nane said “2016 was rather a difficult year for the sector. There were many challenges affecting air traffic during the year, the most significant of which were the events of July 15th. Despite this, we have worked tirelessly to increase our guest numbers and our revenue, and at the same time have kept our expenses under control with clever and sometimes ingenious projects. By the end of the year, we had provided our services to a total of 24.14 million guests comprising of 15.29 million on international routes and 8.85 million on routes in Turkey. While the market as a whole grew 5.8% on routes in Turkey, we at Pegasus successfully grew our guest numbers by 10.7% with our main hub being at Istanbul's Sabiha Gokcen Airport. Similarly, while the international flight market shrank by 15.5% we recorded growth of 3.9%.”

Each seat is sold about 7 times a day

Mehmet T. Nane added “By continuing to use our 82-craft fleet effectively and productively, we increased our number of landings in 2016 to 166,691. We ensure that each of our aircraft is utilised on average 12 hours a day. So when one of our aircraft makes 7 flights in one day, we might sell the same seat around 7 times per day.

“The management decisions taken in 2016 will help us to actively prepare for the future.”

Mehmet T. Nane stated that they had taken some effective management decisions during the challenging year of 2016. “Our priority was reducing costs. We have instigated some ingenious projects that really give us the right to be called a low-cost airline. We have inaugurated strict optimisation of all our cost items. Through strategic steps such as bringing forward our Airbus orders, with their higher fuel efficiency, and rescheduling our Boeing deliveries, we have reformed both our cash flow and our fuel cost management. We have increased efficiency and savings in our flight operations by introducing the Electronic Flight Bag/EFB throughout the fleet. By ending the use of paper in the cockpit we have achieved our goals with regard to reducing in-flight weight and increasing operational efficiency.

Concluding the Aircraft Tracker project, which automatically monitors maintainance/fault status during flights in all our aircraft and helps us devise solutions before the plane even lands, allowed us to achieve important progress in operational continuity and maintenance/repair cost efficiency. We now use electronic flight maps for 60% of the airports we fly to. We will increase this rate to 100% in 2017, treating Pegasus cockpits as data centres. By using ‘big data' in this way in the cockpit, we will achieve the most efficient flight operation conditions.”

Mehmet T. Nane continued “In 2016 and the first quarter of 2017 we assessed our existing fleet with regard to efficiency. First, we rented out four of our Boeing B737-800 aircraft to Pakistan Airlines (PIA) and two to Flynas on a wet lease. Then, on 20th March, we sold seven Boeing 737-800NG aircraft from among the company assets to Air Lease Corporation for a total of 178.7 million USD.  The income that we receive from the sale, which is expected to be completed by the end of October, will be used to pay for these aircraft, which we have added to our fleet using financial leasing and to realise new investments. With this sale, we have accelerated portfolio replacement to ensure optimisation of fuel use within the scope of our 100-craft Airbus NEO agreement from 2012 and increased the number of new A320 Neo purchases planned for 2017 from 3 to 6. Thus our average fleet age will fall and we will achieve an improvement in aircraft operating costs.”

Mehmet T. Nane said that Pegasus is primarily guest-focussed, and stated that with their investments in technology they were aiming to give their guests a better guest experience. “Technology provides us with operational cost advantages while making our guests' lives easier, thus increasing their satisfaction levels. We care about digitalisation in improving the guest experience. In this context, in 2016 we purchased Salesforce, which has an extremely competent infrastructure in the service area to manage guest notifications via a single channel and ensure more rapid and effective feedback to our guests. With Salesforce we have started to keep all guest complaints on a single platform, whether they were made via email, call centre, social media or to our website. With complaint management integration we aim to provide an instantaneous solution to more of our guests as much as possible.

The figures for January-February 2017 are quite agreeable. Our target-focussed actions achieved a 90% improvement rate and the flow of information between teams has speeded up considerably. The waiting period for complaints in in-house departments decreased by 32%.

We have been performing all of our own ground management operations at our main hub of Istanbul Sabiha Gokcen since May. With this project, we have achieved a major improvement in cleaning and reducing delays caused by ground services and boarding/de-boarding procedures. For example, when we evaluated our 7-month ground operation results, we saw an improvement of 30% in baggage waiting times and a 35% improvement in lost/damaged baggage cases. This is reflected in increased guest satisfaction and efficiency.”

Mehmet T. Nane stated that they care about offering guests choices at every stage of their trips. “We offer many additional products and services so that guests can personalise their flights as they wish and arrange their holidays according to their budget and preferences. We are there for our guests before, during and after their flights, and we continue to make investments in order to become a full travel brand offering services from A to Z.”

Mehmet T. Nane disclosed that they aim to increase the number of guests carried by Pegasus in 2017 by between 5 and 7%, and expressed their hopes for 2017. “We have declared this year as one in which we will regain our figures from before the 2016 crisis. We have great faith in the Turkish economy and its tourism potential. That is why, though we see 2017 as a period of renewal, we expect the real growth to occur in 2018 and beyond.”

“Our affiliates have an important place in our expansion plans”

Emphasising that with its stakes in IzAir and AirManas, Pegasus is a regional player and he highlighted the part these affiliates have to play in Pegasus's expansion plans.

Pegasus recently reached agreement with Air Berlin to purchase their 29.51% stake in IzAir for 1.2 million Euros. After this purchase has been approved by the Ministry of Transport and the competition board, Pegasus' stake in IzAir will rise to 98.63.