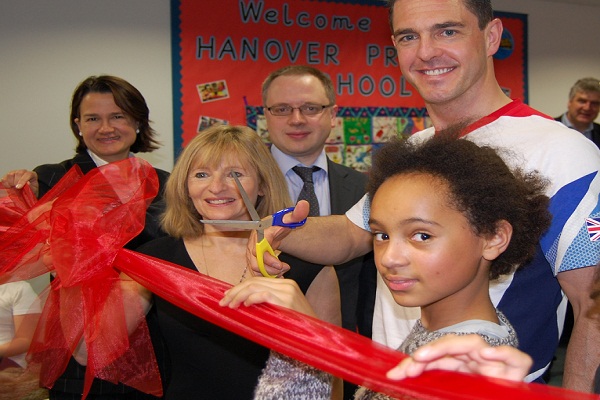 Nearly £6 million has been invested in the building in N1, which is now completely accessible for wheelchair users.  Among the other improvements made as a result of the refurbishments are:

*A new hall used for a range of team sports, as well as offering space for dance and drama classes, performances and whole school assemblies.

*An additional outside play area in the roof of the hall along with a resurfacing of the existing rooftop playground.

*Existing classrooms enlarged, with windows and balconies replaced to open up views of the Regents Canal.

*A new, bright and airy library and learning resource centre built in the roof of the school.

*A dedicated area within the school for younger pupils attending Hanover Nursery.

*A new entrance and foyer with canal views making access to the building easier at busy times.

*A new kitchen and dining area.

Mark Colbourne set a new world record in the London 2012 Paralympic Games when he won a gold medal in the C1 Individual 3km Pursuit. He was also the first to gain a Paralympic medal for Great Britain when he scooped silver in the C1-2-3 1km Time Trial.

Mark joined assemblies at Hanover on Thursday 22 November, to answer questions from pupils and show them his Paralympic medals, before cutting a ribbon at the celebration event.

"We are delighted with the refurbishment of our school building and really enjoying the benefits that having a large new hall bring. The original character of the building has been retained alongside the improvements.

"The whole project has gone very smoothly and despite the trials of 15 months of building work, moral remained high among the staff, pupils and their families."

Hanover School is a Grade 2 listed building, and all the improvements have been made in line with English Heritage and local conservation requirements.

Guests at the celebration event were entertained by the school choir and orchestra.

"We want all our school children to reach their potential and that's why we're making sure they have first-class school buildings and facilities to use.   I'm sure Mark Colbourne's visit to the school will inspire the pupils to make the most of their brand new sports hall."

The refurbishment of Hanover School was carried out by Balfour Beatty.

"It was a great pleasure being part of the new build and refurbishment process.  The headteacher, staff and pupils were all a delight to work with. They have been so patient with the build programme. The facilities will provide a great environment for future learning for the young people of Islington."